Next Green Wave Holdings Inc. (CA: NGW – $0.30 & US: NXGWF – $0.21) announced the launch of a bold new line of THC Products with influential Chicago hip-hop star King Louie. The exclusive partnership is with NGW’s recently acquired subsidiary SD Cannabis, marking the second major influencer to launch a product line since the closure of the acquisition. The Company moved quickly to take advantage of the growing CBD pet market by launching two product lines under Loki the Wolfdog in April; developments that we have previously written about.

King Louie will be launching premium flower THC products and concentrates throughout his new ‘Life of Louie’ album world-tour and appearances at selected dispensaries throughout Southern California. NGW understands that in a new but competitive marketplace, it is selling a lifestyle as much as it is selling a product. In order to appeal to Millennials, NGW must brand itself as “cool”.

CEO Leigh Hughes understands this branding concept exceptionally well as he stated, “We’re thrilled to be collaborating on this product launch with King Louie, he is a trailblazer in the hip-hop industry and influential ambassador of cannabis culture in America. Together, we have the opportunity to shape the norms and perceptions surrounding cannabis culture and will offer consumers an elevated experience through the quality and delivery of our extracted oils and exclusive flower products.”

King Louie was equally complementary to the quality and originality of SD Cannabis, stating, “It’s a lifestyle for us, so it’s gonna be the best or nothing at all. We wanted to bring that same standard, along with something different to the market for everyone to enjoy”. 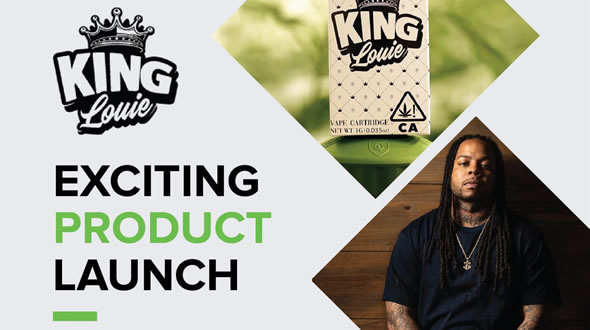 Investors can expect a steady news flow from NGW in the coming months regarding the brands it acquired as part of its SD Cannabis subsidiary. In a corporate update released at the end of May, it made specific reference to its focus on introducing SDC’s 8 brands, 45 THC and CBD products to the Californian market. NGW has already integrated SDC’s extraction and manufacturing expertise into its facilities and is currently fitting out Facility C which will house the extraction business. In addition to Loki and King Louie, investors should be on the alert for news updates and product launches from Carey Hart, Sketchy Tank, Junkyard LA, Toy Machine Skateboard Co, SD Cannabis, the NoJumper OSS Podcast run by Adam 22 and Thorn St. Beer.

NGW provided detailed production and technology updates and timelines in the corporate update. The Company has started cannabis production at Facility A with the breeding program to build up its nursery stock beginning in late April. Revenue from the cultivation process is expected to take place in Q3 as the full cycle from seedling to sale is expected to take about four months. There are 14 grow rooms at Facility A and two grow rooms will be harvested every two weeks to ensure that there is a constant supply to the Company’s vendors.

NGW also plans to expand internationally through its brand licensing opportunities. NGW made a strategic investment into Organic Medical Growth (OMG) in February 2019.

The Company expects that a range of its brands will be selling into Colombia in 2019. Through this partnership and a brand licensing agreement, NGW has access to selling its products in 7,000 pharmacies across Colombia. OMG is expecting to go public in Canada in late 2019 with Next Green Wave having a 10% equity ownership post its first initial public offering financing round.

There is an old adage of “sell in May and go away” which suggests that stocks drift downwards during the quieter summer months. NGW has seen consistent selling pressure over the spring despite a steady stream of positive updates. The Company is generating revenue immediately from product launches of SD Cannabis with expectations of cultivation revenue as early as Q3 and cultivars optimized with Intrexon’s technology ready for commercialization in 2020. The cannabis sector has been in the middle of a mini-bear market which has hit junior players like NGW particularly hard. NGW this week announced a private placement of CAD $3 million consisting of 9 million shares at $0.33 which may also have led to some selling pressure leading up to its announcement.

Unfortunately for start-up companies, the risk of dilution is always there as funds will be needed until the Company is cash flow positive. NGW’s placement represents less than 8% dilution so it is not very burdensome and $1.5 million of it is in the form of a strategic investment from a publicly listed cannabis company. Investors should take note that this investment could be a prelude to something larger down the road, including the possibility of a buyout.

The recent pullback represents a unique opportunity for investors who can take advantage of it. NGW has never been closer to achieving revenues and yet the stock is sitting at the lowest point since the start of 2019. That leads us to believe that there is an asymmetrical risk-to-reward profile on NGW. Investors who can tolerate this volatility and are able to hold onto NGW for the next several quarters to give the Company some time to prove itself should consider this a tremendous buying opportunity. Smallcaps Recommendation: BUY.