These projects were assembled based on the potential for the formation of a scandium mineral deposit related to the impact of a meteor. Several important deposits worldwide for a variety of metals have been documented in meteor craters. A historic drill hole by a previous operator of the project area contributed the initial indications for a discovery. Assay results above 500gpt scandium were reported.

Once Imperial had opted to acquire the northern and western portions of the crater feature to investigate the potential for this area, Globex was quick to seize the opportunity to acquire the remaining areas of interest surrounding the impact zone to the south and east. 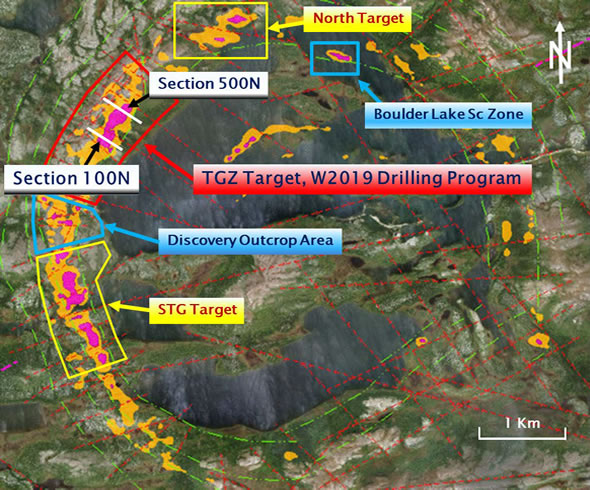 Preliminary fieldwork programs and a geophysical survey completed by Imperial provided evidence to support a possible scandium deposit. Sampling was completed in some of the alteration features identified in the crater rim surrounding the impact area. This work demonstrated some high grade assay values for scandium and rare earth elements. Subsequent geophysical interpretation outlined a number of magnetic anomalies localized around the periphery of the crater. Based on this information, Imperial decided to commence a drilling program.

Scandium is an element that some people are unfamiliar with. The metal is blended in aluminum alloys to improve the physical properties for industrial fabrication. Relative scarcity and strong industrial demand has led to a premium price for scandium. The potential for a new scandium development candidate is therefore very attractive for continuation of the exploration program.

This week, Imperial presented another batch of assay results from its drill program. Again, the drilling encountered wide intervals bearing impressive grades of scandium. This included a section of nearly 114 meters with an average of 310gpt scandium oxide (Sc2O3). In another drill core, an average grade of 314gpt was reported across more than 95 meters. Attractive levels of REE were also associated with the alteration sections where scandium was present.

As a commodity, scandium oxide may sell in the range of US$1500 per kilogram. To put the results of the drilling program in context, this equates to a similar gross metal price as a discovery above 12gpt gold. The additional potential by-product value of the REE content adds further economic appeal to the discovery.

The drilling results now outline a large area of alteration, extending from surface and continuing to depths of more than 200 meters. At this early stage the geological setting would be favorable for potential open-pit mining to access the deposit. Imperial also reports that a new mineralized target has been identified more than 70 meters further east of the main discovery zone.

This is good news for Globex shareholders. The consistent mineralized area may extend around to the crater zone within the Globex property area to the southeast. It is common for multiple zones of a near-surface deposit to be developed under a cohesive mine plan as satellite pits for an open pit mine. If indeed there are economic deposit areas awaiting discovery at Crater Lake SE, the development scenario would likely call for a consolidation of these two properties.

The target zone has now been successfully delineated from surface to a depth of 450 meters. In early June CIM announced that it had signed a drilling contract to complete another 8 drill holes on the target zone. With the successful completion of a recent flow through financing to raise more than $1 million, the Company is funded to commence the next round of drilling work.

This week the receipt of the drilling permit was reported by CIM. A drill has been mobilized to the project and drilling is now underway. The program is planned to include a total of at least 3,400 meters of drilling.

CIM was originally created as a subsidiary company that was divested to Globex shareholders in 2012. Now separately listed and trading, CIM is focused on advancing exploration work at Bateman Bay to outline a copper-gold and silver resource to build value for shareholders. Many of the same personnel from the Globex management team are working with CIM. Globex retains a 3% gross metal royalty on the Bateman Bay property.

Imperial can be congratulated for taking the initiative to secure ownership of the northern portion of Crater Lake. Globex must also be recognized for the decision to stake the Crater Lake SE property to gain control of the remaining portion of the target area around the crater.

The fact that Imperial has completed a successful drilling program on its property has created greater speculative appeal for Globex shareholders. The release of positive exploration results builds a case for a valuable metals deposit that may extend around the crater. High grade scandium plus enriched REE content provides leverage to valuable commodities attractive for mine development.

Globex is now much more confident that a successful program may be completed on its Crater Lake SE project. The Company may also consider a transaction to sell or JV the project. Globex shareholders may now look forward to a positive outcome from this early stage project acquired cheaply through staking.

Work underway by CIM at Bateman Bay is another example of potential value creation for Globex shareholders due to the activity of another company. With the retained 3% GMR, Globex may gain a payment stream if the successful exploration work continues and results in a producing mine development. The royalty portfolio controlled by Globex has already contributed strong value for shareholders through other holdings.

The ability to recognize opportunities and the establishment of a diverse range of projects has positioned Globex among the most stable mineral exploration microcap stocks in Canada. Property transactions and retained royalties enable Globex to participate in the success of exploration work funded by other players. This leverage to multiple projects and ongoing exploration activity improves the prospect for value creation. Smallcaps Recommendation: BUY.