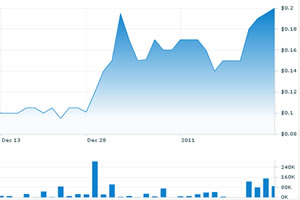 Since late 2010 Global Green Solutions’ (GGRN) stock price has doubled to $0.20. The reason for this is that part of the uncertainty has been taken away after the Company announced that its Greensteam demonstration unit achieved full steam generation capacity operating on residual woody agricultural biomass fuel.

Many potential investors already had their eye on Global Green but resisted to purchase shares because they felt there were too many uncertainties:

Each time one of those uncertainties is taken away, more investors decide to take the plunge and buy some shares. Obviously, with every milestone reached, the stock price increases. This is simple economics; an investor gets a higher reward for taking higher risks.

In order to complete the testing phase of the Greensteam demonstration unit, Global Green is raising money via a private placement. Currently, the Company is offering a 12% per annum convertible note. Each dollar invested in a convertible note can be converted into 10 common shares ($0.10/share) plus 10 share purchase warrants exercisable at $0.25 per share for two years from conversion. The note can be converted at any time during its two year term, and interest earned while holding the note is also convertible into shares and warrants on the same basis.

With the stock price currently at $0.20 this is a very attractive placement. Additionally, the Company doesn’t want to raise an awful lot of money, just enough to be able to complete the demonstration plant operational test period at the Aera facility in Bakersfield, California. So it’s very unlikely this offer will be open for much longer.

In the E.U. for instance, a series of demanding climate and energy targets, known as the “20-20-20” targets, have to be met by 2020. This may seem many years away, but remember that it takes years to plan, develop and build a new installation. Likewise in the United States where strict emissions regulations, like Boiler MACT, are being implemented at this moment.

Studies show that the Greensteam technology is an excellent solution for efficient and economic conversion of biomass to energy and that it complies with the strictest air emission regulations. For example, by replacing a number of natural gas fired steam generators with Greensteam biomass fired steam generators, Aera Energy will reduce its Greenhouse Gas emission rate by approximately 348,000 tons CO2 per year.

Global Green Solutions has a well-balanced management team and an competitive advantage biomass to energy technology. Additionally, the Company has surrounded itself with large and valuable partners: Aera Energy (a Shell and ExxonMobil joint venture) and Ledcor (a large North American Engineering, Procurement and Construction contractor).

Based on those facts and an increasing pipeline of opportunities, I’m convinced Global Green will raise the necessary money to complete the demonstration test phase and proceed to full commercialization of the Greensteam technology.

By the way, when the Company announces that enough money has been raised, rest assured that the stock price will increase again. Simple economics you know.