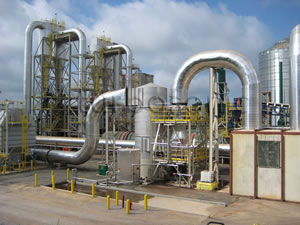 The TurboVenturi scrubber is one of TurboSonic's high-efficiency particulate removal devices.

The EPA was initially required to issue Boiler MACT* standards by the year 2000. After several delays, the rule was finalized on February 26, 2004. However, the U.S. Court of Appeals for the District of Columbia Circuit issued a decision to vacate the Industrial Boiler MACT Rule in 2007, and the EPA was required to rewrite it and publish the rule by December 16, 2010. The EPA then requested and received an extension until January 16, 2011.

A few days before that deadline, the EPA asked a federal judge for another 15-month extension for releasing the Boiler MACT rule, claiming it needed more time to respond to 4,800 individual comments it received after it published a draft version of the rule.

The judge presumably wasn’t amused by the EPA’s request and gave them 30 days instead of 15 months to get their act together. EPA said it was “disappointed” that the extension was not longer.

* Boiler MACT applies to thousands of industrial boilers that emit, or have the potential to emit, 10 tons or more per year of any single HAP or 25 tons per year of any combination of HAPs. The rule requires each boiler at a facility to meet emission limits, operating limits and demonstrate compliance on a continuous basis.

The EPA has until February 21st to have the regulations published in the Federal Register. Sixty days later they effectively become law.

After that, there’s a 3 year window for the thousands of installations, affected by Boiler MACT, to comply with the new regulations.

Even though Companies have a few years to adjust, you’re going to see some of them wanting to comply as fast as possible due to material and supply pressures that are anticipated. They figure, we have postponed it as long as possible, but now that it really will become a law we might as well get it over with.

We might not see the effects of Boiler MACT in TurboSonic’s next quarter, but discussions are already underway with some major corporations and I expect many additional Companies to make inquiries about how TurboSonic can help them achieve the new emissions rules.

Obviously, there are several other companies offering solutions, but as Mr. Spink, TurboSonic’s CEO, said in our latest interview: “There are certainly quite a number of Companies that offer solutions to satisfy these requirements, but TurboSonic has developed a very extensive array of references in those specific industries most affected by Boiler MACT and on those applications that are the heart of that new regulation.”

The fact that the EPA was only granted a 30 day extension is good news for TurboSonic. By April 2014 thousands of boiler installations will need to be adjusted and TurboSonic is one of the few companies that has the technology and capacity to deliver.

I’m surprised to see TurboSonic’s stock price around the same level it was before the judge’s ruling.