News » NSGold Proves to be Much More Than Mooseland Alone 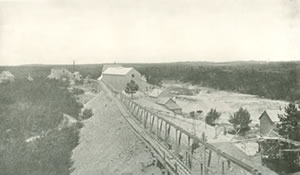 The Micmac Gold mine in the early 1900s, now part of the NSGold Leipsigate property.

Those who believed that NSGold Corp. (NSX – $0.34) was only going to concentrate on its Mooseland Gold Property should think again. Earlier this week, NSGold gave an interesting update on it drilling program at its Leipsigate property, proving that it’s a diversified mineral exploration company.

Before I go deeper into the Leipsigate drilling results, let me explain why it’s important to be diversified.

In April 2010, NSGold acquired a 100% interest in the Mooseland Gold Project and five other early-stage properties from Globex Mining Enterprises. Because much historic information was available on Mooseland, the Company decided to focus its attention first on this property.

However, the five other properties: Leipsigate, Indian Path, Blockhouse, French Village and Cheticamp – all situated in the province of Nova Scotia, Canada – are attractive as well. The first three are former gold-producing properties while the latter two are gold and base-metal exploration properties.

It’s important for any mining company to have a well diversified portfolio of properties because anything can go wrong: drilling results can be less than expected, permits can be refused, etc. NSGold minimizes this risk by owning several high potential properties.

Gold was first discovered at Leipsigate during the 1880s, and reached its highest productivity level between 1898 and 1908. The property covers an area of 2,168 hectares on 134 mineral claims. It has numerous narrow gold zones and at least 7 historic shafts, the deepest of which reaches a depth of approximately 100 meters. Reported historic mining recovered 9,650 ounces of gold from an estimated production of 30,000 tons of ore.

In the 1980s, two reserve estimates were prepared on portions of the Main Fissure Vein held at that time by the reporting company.

Note that the above gold resource estimates are historic in nature and were compiled before National Instrument 43-101 Standards of Disclosure for Mineral Projects came into effect. The resource estimates have not been verified by an independent “Qualified Person” and are presented for information purposes only.

NSGold completed 3 diamond drill holes at Leipsigate totaling 281 meters. The actual assay results are expected around mid February, but a few conclusions can already be drawn.

Drill holes 1 and 2 had two objectives. First, to find a new gold bearing vein that the Company knows is out there, but on which there’s very little or no information available. And secondly, to find out where this new vein crosses the Main Fissure Vein. The reason they’re searching for the area where the two veins cross, is because there’s a high chance of finding a large zone with high grade gold on that spot.

The good news is they found the new vein they were looking for and that it is gold bearing. However, they didn’t find the zone where the two veins cross. The two drill holes also gave the Company’s geologists a better understanding of the area and the ability to project where the two veins might cross.

The third drill hole went after the Main Fissure Vein to make sure that it extends as far as the Company’s geologists anticipate it does. The results confirm this is the case.

The drill results indicate that there are several high-grade gold zones at Leipsigate with plenty of upside potential.

A drill program will be developed for the property in the next few weeks. This program will be based on the assay results of the three drill holes and historic reports from previous owners. The drilling will also be adjusted on the spot, based on what they find.

NSGold wants to move fast, and wants to do it thoroughly and responsibly. Carefully acquiring a well balanced portfolio of properties has been achieved successfully. Analyzing the properties and determining where to invest the available resources is the next step.