News » The Hits Keep on Coming for Renforth Resources

The Hits Keep on Coming for Renforth Resources

The Parbec project was back in the news headlines this week, as Renforth Resources Inc. (CA: RFR – $0.08 & US: RFHRF – $0.06 & GER: 9RR – €0.04) reported yet another high grade interval from the spring drilling program. In all, a batch of assays from five of the remaining drill holes was reported. Many other extremely encouraging gold sections were also presented.

The highlight of this news was a section of 9.5 meters bearing an average of 4.66 g/t gold, in hole PAR-21-135. This was encountered more than 300 meters down hole, in one of the deepest gold intervals reported so far. Within this wide band of mineralization, an exceptional subinterval of one meter was enriched with 31.2 g/t gold. The Cadillac Break structure is known for the endowment of high grade gold extending to great depths below surface. It appears that the Parbec deposit is a beneficiary of this enrichment as Renforth is demonstrating through its deeper drilling work.

All five of the drill holes in this set encountered at least one significant gold interval, maintaining the perfect winning streak that Renforth has achieved in all drill holes since the Company commenced exploration at this project. One other notable intercept of 2.3 meters from PAR-21-137 was mineralized with 2.04 g/t gold starting from 155m down hole. This is well within the open pit shell and more than twice the average grade of the deposit so far.

As the Company continues to report the remaining drill core assays, Parbec has delivered wider intervals of gold with higher grades than had been achieved in earlier phases of exploration. Many of these drill holes were part of an infill drilling plan to confirm continuity of gold alteration through areas of the deposit where no previous gold values were eligible for inclusion in the maiden resource estimate. The success to present so many attractive results in these ‘gap zones’ is building expectations that a much larger overall gold deposit is going to be presented when the resource estimate is updated.

Through the years of previous exploration work, Renforth was focused on establishing a near-surface gold resource that is suitable for open pit mining operations. Gold values below a gram of gold per tonne are potentially economic to mine if enough of this mineralization can be proven up near surface. This expectation has been demonstrated immediately adjacent to Parbec, at the Canadian Malartic Gold Mine. Average gold grades near surface at Parbec are similar or higher than the resources being mined next door.

Renforth cleverly planned the drill orientation such that conceptual resource zones associated with the open pit shell may be encountered, and then continued many of the holes further to depth to test for higher grade gold sections below. As such, the significant drilling work starting from last fall has been enormously successful for the objectives of the plan.

Additional Exploration Work at Surimeau Planned for the Months Ahead

Renforth also presented an update on the status of the ongoing work at Surimeau, the Company’s battery metals property. The Company is still awaiting the full suite of assay results from its recently completed drilling program. However, visual inspection of the drill core confirmed very appealing alteration zones near surface and across more than 2kms of strike length tested so far at the Victoria West target.

This successful start to exploration is just the breakthrough discovery for what may amount to a much larger deposit area. One method to better ascertain this potential is to launch a more detailed magnetic survey further along strike. Technology has advanced to enable aerial surveying equipment to be mounted on drone units. This affords a much faster and more cost-effective method to gain additional data than a conventional airborne survey. Renforth will commence this program shortly. The interpretation of this program will be used to better define the next round of drill targets. 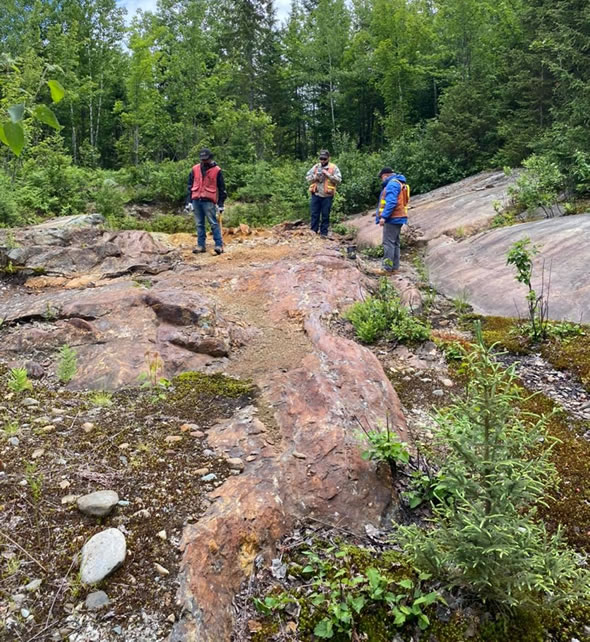 In addition, the Company has applied for permitting to allow surface stripping of overburden along a wider section of the structural target. By exposing more of the near-surface mineralization, the project geologists will have the opportunity to learn more about the mineralized system beyond the relatively small strike that is currently open at outcrops. Fieldwork is set to commence in September. If all goes according to plan, another drill program will be launched this fall.

Victoria West will remain the primary focus of the next round of exploration. The opportunity at Surimeau involves an enormous area with many attractive targets. Renforth believes the best approach is to focus on one main section that is already delivering positive results. The plan to advance incrementally and build the exploration data in stages may be much more efficient before extending the program to other targets.

This week has served to move the ball forward yet again for Renforth shareholders. By now, the expectation for positive news from the Parbec project has been reinforced by month after month of superb assay results. The issue is no longer a question of whether the pending resource update will generate a significant increase in the estimated gold content. Thousands of meters of additional drill data, plus the expected addition of another 13,000 meter of historical drilling work, will likely lead to a published resource estimate that establishes Parbec as a compelling prospect for mine development. As the mineral inventory of the Canadian Malartic Mine is gradually depleting, one may assume that the adjacent Parbec deposit will be enormously attractive as a takeover candidate.

Meanwhile a similar advancement along the value curve is underway at Surimeau. Breakthrough discovery results have validated the early geophysical indications for a significant mineralized system. Renforth is completing patient and methodical exploration work to expand this initial discovery beachhead. The discipline to proceed with a focused strategy may pay off with a more effective district-scale exploration effort later. As it stands, Victoria West is already a significant battery metals deposit. Further success along strike and to depth carries the potential for yet another compelling development candidate to emerge. And this is just one of at least six high profile targets so far at Surimeau.

Waiting on assay results has been the theme for this year. Renforth is not content to stand idly with so much exciting potential on deck. Instead, the Company is moving forward to continue building shareholder value at the end of the drill bit. With two of the most exciting exploration prospects in Quebec currently advancing, the Company remains a high priority discovery story with a bright future. Smallcaps Recommendation: BUY.