The enormous expanse of the Surimeau property demands that significant exploration activity will be required for many years to properly investigate the untapped discovery potential of the project. In the relatively short time since Renforth Resources Inc. (CA:RFR – $0.08 & US:RFHRF – $0.06 & GER:9RR – €0.05) assembled the property, including recently added holdings acquired through staking, three separate drill programs were conducted. The Company reported this month that the most recent effort of four drill holes in the Victoria West target area has now been completed.

The drilling work was planned to follow up on the previous round of drilling completed earlier this year. Project geologists confirmed the presence of massive sulphides in the drill core. A near-surface zone of mineralization has been outlined up to 250m in depth so far. Assay results from drill core samples are still eagerly awaited. 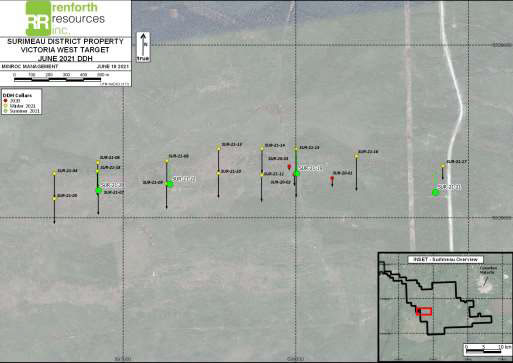 The holes drilled in the June/July 2021 program are indicated in green in the map below, using pads cut for the prior 2021 drilling where each hole drilled over a 2.2 km strike, within the 5km Victoria West target, intersected visible nickel, copper and zinc sulphides.

More recent drilling work was planned to extend the defined mineralized zones further to depth. All four of the drill holes in this program were aligned to undercut previously drilled holes. Drill pads were stepped back to enable a different angle of drilling along this section of the target. The program is intended to deliver valuable data on the structural set up of this system while ideally, continuing to expand the defined outline of the emerging deposit.

Inspection of the drill core from these holes has yielded very encouraging observations. Visible nickel mineralization was highlighted in drill hole SUR-21-20, encountered about 160m down hole. Occurring within the mineral pentlandite, this section was the highest concentration of visible nickel so far in the program. Visible copper was encountered in the previous drill hole of the program, SUR-21-19. 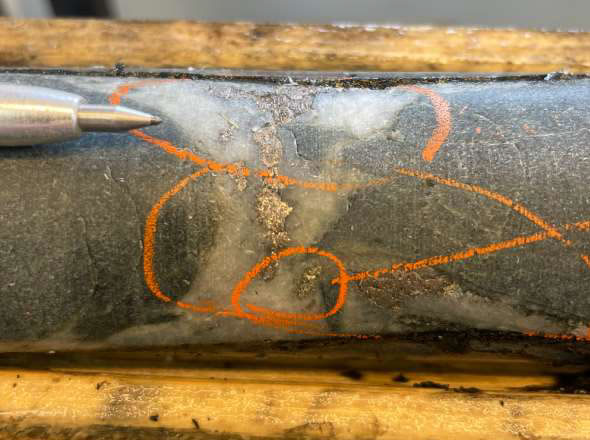 Visible massive pentlandite was encountered within a vein in SUR-21-20 located 160m down the hole, an approximate vertical depth of 139m.

At this early stage the drill core is providing clues about the nature of this mineralized system. Enriched copper and nickel are rarely emplaced within the same alteration event. It is therefore assumed that at least two separate phases of alteration were acting on this area. One phase of mineralization led to the formation of a nickel deposit. The second distinct event embedded the copper enrichment. These systems may extend across a wide zone of alteration. At Victoria West they overlap, at least during the section that has been targeted so far by drilling work.

The Victoria West target area is interpreted to continue for approximately 5km in strike. Combined with the previous round of drilling, some 2.2 km of the system has now been tested. This is part of a larger structural corridor extending more than 20km laterally. The Colonie target is located at the eastern end of this corridor. And there are at least 6 major target systems identified so far on this 260 square-kilometer property.

The indications so far provide a glimpse of a major system that remains open in all directions. The pending assay data for samples from the last two drilling programs completed may shed further light on the setting.

Located in the Abitibi Greenstone Belt of Quebec, the Denain-Pershing project was originally optioned to Chalice Gold Mines Ltd in a transaction reported in 2018. Renforth was paid $50,000 in cash upon signing and another $50,000 on the first anniversary of the agreement. As part of the transaction, Chalice also agreed to subscribe for $250,000 in Renforth common shares. This represented a significant injection of cash to Renforth at that time.

O3 Mining Inc (O3) secured the option deal for Denain-Pershing following its acquisition in 2019 of all Quebec mining assets held by Chalice. The property was incorporated into the East Cadillac Project under advancement by O3. Recently completed exploration work enabled O3 to fulfill the obligation to earn 80% ownership of the property.

Under the terms of the option deal, the property ownership converted to a JV structure with Renforth positioned as a minority partner. Renforth would have to contribute 20% of subsequent exploration funding to maintain this interest, or eventually lose its share of the property. Instead, the Company has opted to sell its remaining interest to O3.

Renforth reported this week that it received a total of CDN$125,000 in cash, plus 21,603 common shares of O3 in payment. This included the final $50,000 installment payment for the original option deal. The divestiture of the non-core Denain-Pershing property has generated a capital gain for Renforth. The Company does not retain any royalty leverage to this property.

The resolution to this arrangement increased the working capital position for the Company. Going forward, Renforth will now focus on its wholly owned property assets where it controls the exploration effort and has full leverage to the successful advancement of each discovery.

Renforth has remained active with drilling work this year at several properties. At Surimeau, shareholders look forward with anticipation for further expansion of the emerging discovery zones. The confirmation of visible mineralization in drill core is therefore a very positive factor that builds speculative excitement for the pending assay results.

Wide intervals of sulphide mineralization including highly sought after copper, zinc and nickel resources, are located near surface. This emerging base metals deposit creates the potential for an appealing mine development scenario. Battery metals are expected to remain in very high demand for the foreseeable future. Therefore the prospect of at least one major deposit outlined within this established mining district of Quebec positions Surimeau as a very attractive discovery story.

With the divestiture of the Denain-Pershing property completed, Renforth has now cleaned up its property portfolio with greater potential to deliver shareholder value in the years ahead. Rather than facing additional funding demands for a non-core asset, the Company is now positioned with slightly more working capital and a positive relationship with Q3 that may lead to future transactions. The potential to build value from exploration of the wholly owned properties is the correct focus going forward. Smallcaps Recommendation: BUY.