This week the Company sold a second Tecochill CH-400 chiller to Stanley Black & Decker for use in their manufacturing plant in Reynosa, Mexico. The Tecogen chiller is replacing aging electric chillers and will provide chilled water for both air conditioning and process manufacturing to the approximately 4000 employee manufacturing facility.

The factories located along the US-Mexico border, commonly referred to as maquiladoras, are an excellent market for the Tecochill gas-powered cooling product line. Natural gas is plentiful and inexpensive in Mexico, and the factory operators are very sophisticated relative to managing their operating costs. They are particularly aware that, to meet essential cooling needs, the annual cost can be dramatically reduced by switching from electricity to gas.

Benjamin Locke, Tecogen co-Chief Executive Officer added, “The additional chiller order builds on sales momentum we have seen in Mexico and supports our continued expansion in the country. This perfectly aligns with our strategy of expanding geographically by first introducing our chillers and Ilios heat pumps and then following with combined heat and power equipment after the new territory’s installed base has reached critical mass to support a dedicated service team.” 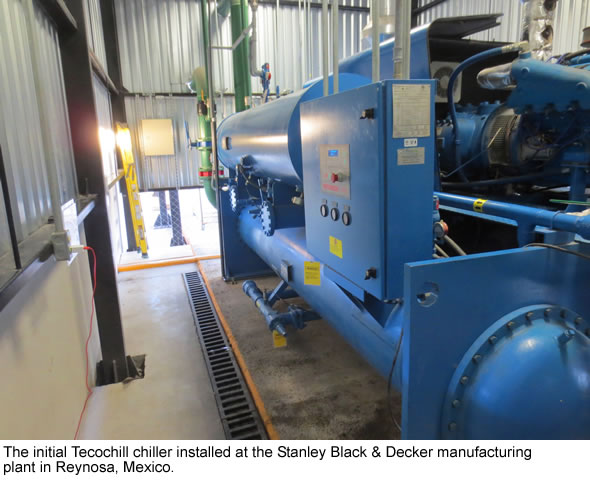 In the last two weeks of May, Tecogen sold a total of three CM-75 combined heat and power (CHP) units. The 75kW system is part of Tecogen’s legacy line of induction-based cogeneration equipment. Introduced in the 1980s and among the first packaged combined heat and power units on the market, the efficient units have been reliably meeting customer’s energy needs for decades.

First, two units were sold to a new multi-family residential building in Jersey City, NJ. The units will be fitted with Tecogen’s Ultera clean emissions system and sit on the roof of the ultra-modern new high-rise tower. The order is worth approximately half a million dollars.

Benjamin Locke mentioned, “This project is notable for a number of reasons. It marks the first complete turnkey installation project Tecogen will undertake for a new-construction building. It is also the third recent order received from the same property developer.”

A third CM-75 cogeneration unit was sold to a state university in New England to meet the thermal and electrical demand of the athletic facility. This system will also be equipped with Tecogen’s patented Ultera emissions control technology.

The contract was awarded in conjunction with a large engineering services company (ESCO) that Tecogen has worked closely with in the past.

Robert Panora, Tecogen’s President and Chief Operating Officer commented, “Delivering a project payback period of less than five years while cutting the facility’s carbon footprint approximately in half, the installation makes both fiscal and environmental sense.”

The new orders increase Tecogen’s sales backlog of equipment and installations. About a month ago, backlog stood at $13.1 million, significantly above Tecogen’s goal of delivering product backlog greater than $10 million. And that number doesn’t even include service contract revenues which were more than one third of the Company’s revenues in 2015.

Maybe even more importantly is that all these sales can be qualified as repeat orders. Stanley Black & Decker ordered its second unit, and the other CHP systems were ordered by a property developer and an ESCO that both had positive prior experiences with Tecogen’s energy efficient equipment. A true validation of the Company’s technology and service. Buy recommendation.