Anthem United (AFY – $0.22) is focused on building a precious metals producing company through the acquisition and development of silver and gold mineral assets. The Company is currently advancing the operation of the 350 tonne per day Koricancha Mill in Peru, in which it owns a 75% interest. The Company’s joint venture partner, EMC Green Group, which is the operator of the Koricancha Mill, owns the remaining 25%, subject to an 8% cost of sales royalty payable to Anthem.

The Koricancha Mill processes gold bearing material purchased from legal small scale and artisanal miners in Peru at a discount to the prevailing market price.

With the operating capability of the plant established during the third quarter of 2015, the Company commenced accounting for operations at the Koricancha Mill on a commercial production basis as of October 1, 2015.

Monthly operating throughput at Koricancha steadily increased through the fourth quarter of 2015 reaching 3,600 tonnes delivered and 3,300 tonnes processed in December alone. This represents approximately one third of the installed monthly operating capacity of the Koricancha Mill. It was the intention of the Company to continue to increase the throughput of the mill to its installed capacity of 10,000 tonnes per month.

However, because the timing to establish regular recovery of value added taxes (VAT) in Peru significantly exceeded the initial estimates of management, Anthem was forced to substantially reduce purchases and processing of mineralized feed in January 2016 in order to better manage and preserve available working capital.

Tax laws in Peru provide that the Koricancha Mill can recover the 18% value added tax applied to the majority of its capital and operating costs incurred in the country. At March 31, 2016, Koricancha had already incurred approximately US$3.4 million in recoverable VAT.

The good news is that subsequent to March 31, 2016, Anthem has received a first recovery of VAT. To date it has recovered approximately $1.1 million. The Company expects from now on to receive these funds on a regular basis. A direct result is that Anthem will start to ramp up production again. 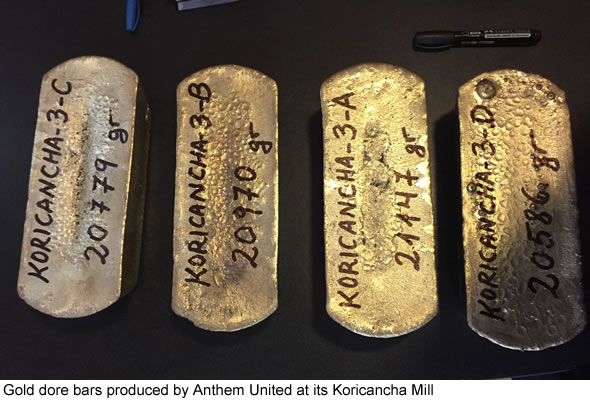 Moreover, the Company is assessing additional working capital funding in order to accelerate the throughput even more. It increased its existing US$2 million ore purchase credit facility to US$2.5 million, and it recently completed a private placement in which it raised more than US$800,000.

Also, Anthem intends to shorten the revenue cycle with some of its gold and silver offtakers. The majority of the Company’s operating costs are spent right away on buying ore. However, it takes several weeks before Anthem receives any income from the offtakers, because after the precious metals have been recovered to carbon, they are shipped to Lima where they are further processed before gold and silver dore is shipped by air to a refinery in the United States. The goal is for the offtakers to pay Anthem earlier in the process, which will again improve the Company’s cash flow.

In the second quarter of 2015, the Company, along with EMC, entered into an agreement to acquire four private Peruvian companies. The material assets of these companies included a 350 tonne per day mill in Chaparra, Peru and an associated portfolio of three mineral claims. The terms of the transaction included, among other things, total consideration of $14 million of which an initial payment of $3 million was paid in full in July 2015.

During the first quarter of 2016, the Company and EMC elected not to proceed with the acquisition of the Chaparra Assets. While management continues to believe in the long-term strategic and economic merits of the acquisition, the market environment for gold companies over the course of fiscal 2015 made obtaining the capital necessary to close the transaction, on terms reasonable to the Company, extremely challenging.

This is unfortunate, as the Chaparra mill and mineral assets were complementary to the Koricancha mill. The two mills combined would have created meaningful scale in what is currently a highly fragmented industry characterized by smaller, single asset operations.

Anthem and EMC continue to be in discussions with the vendor of the Chaparra Assets though to determine whether a mutually agreeable alternative transaction can be negotiated.

Revenues are expected to increase later this year as the working capital issue seems to be resolved.

Now that the Peruvian VAT issue has been resolved, the Company will increase the throughput again at its Koricancha Mill. In addition, Anthem’s management continues to work on reducing production costs.

We continue to have confidence in the cash generating potential of Anthem’s business model. Thanks to increased production and higher margins, the Company and its stock price should thrive.