An Ultera is Tecogen’s proprietary muffler-like emissions control technology that reduces a natural gas powered engine’s harmful emissions such as NOx, CO, and hydrocarbons to near zero levels. Hundreds of Ulteras have been installed on cogeneration systems so far and function impeccably. There is no comparable technology on the market today. It truly sets Tecogen apart from its competition.

In December 2015, following the outbreak of the Volkswagen emissions scandal, Tecogen formed Ultra Emissions Technologies Ltd (Ultratek), with the goal to adapt the Ultera technology to gasoline fueled automotive engines. The prospect of vehicle engines realizing fuel cell like emissions is tremendously compelling from a policy and market standpoint.

Tecogen received an initial 50% equity interest in the JV in exchange for a worldwide license to use Tecogen’s Ultera emissions control technology in the field of mobile vehicles burning gasoline. The other half of the joint venture equity interest was purchased for $3,000,000 by a small group of offshore investors. 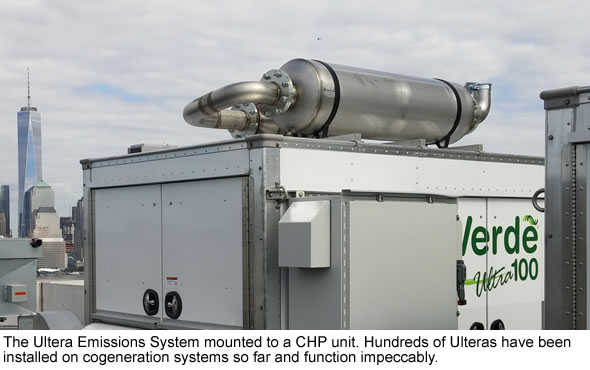 In August 2016, the Ultratek stakeholders invested an additional $4 million through the exercise of warrants, and the following month another $6.25 million was raised in a third round financing. All in all, that left Tecogen with a 43.09% stake in Ultratek.

The joint venture completed two phases of testing, which were highly successful in demonstrating Ultera’s effectiveness. These tests were conducted at the world-renowned AVL California Technical Center and were the subject of a peer-reviewed paper presented at the SAE World Congress in May 2017.

The test results show that carbon monoxide (CO) emissions were reduced by as much as 94% thanks to the use of the Ultera. In addition, levels of non-methane hydrocarbons (NMOG) were lowered by 81%. Needless to say these were outstanding test results! As far as we know no other technology in the world has ever accomplished similar results with gasoline powered engines.

Divergent Views On Next Steps

Over the past few months, Ultratek has had several productive meetings with potential partners from the automotive industry, as well as with government regulators. Based on the feedback and insight from these meetings, a more advanced Ultera device will be completed so that it can fit under the hood of the car and overseen by the vehicle’s control system.

Manufacturing this refined Ultera prototype was the main topic of the conference call, as there seems to have arisen a strategy disagreement between some of the independent investors in Ultratek and Tecogen.

Now that the Company has a successful proof of concept, it has a couple of options. It can discontinue the development of the Ultera and find a commercial partner, such as an automaker or OEM, who will undertake the further development by itself. Alternatively, Ultratek can develop a refined prototype, which will substantially increase the value of the technology. This will enable the Company to develop a practical design and asses what the per-unit-cost will be.

• Car manufacturers want to see the actual components that will potentially be used in their vehicles. In addition, they want to determine the cost of such new equipment. Consequently, a far higher price can be negotiated when a finished product is offered.
• The company will retain all of the intellectual property. In fact, it is likely that during the process of developing the Ultera further, more technological innovations will be created beyond the patents that have already been filed. This will obviously strengthen the Company’s technology portfolio.
• Advancing the technology itself will also enable the Company to offer the finished product to any interested car manufacturer or OEM, which may lead to a very interesting bidding war.

Tecogen’s management mentioned during the conference call that while no definite conclusion has been reached, there is a strong likelihood that both parties will not reach a consensus. If this occurs, this would result in the dissolution of Ultratek and refunding the unspent cash to the investors and Tecogen. Of the $13 million that was raised, about $3 million has already been spent.

Although this would be an unfortunate event, it certainly wouldn’t be a negative one, as Tecogen will regain 100% control of the technology.

To further finance the development of the Ultera, Tecogen is thinking about a new spinout strategy, funded by other investors. The Company’s management mentioned several times during the call that it already has several investors lined up. The idea is to make this a non-public company, in which Tecogen has a controlling interest, and which will consolidate its financials with Tecogen’s.

Moreover, it was mentioned that also the research program, funded by the Propane Education and Research Council (PERC) to demonstrate the effectiveness of the Ultera emissions systems on propane fueled fork trucks, would be spun out into this new joint venture.

Although all parties involved in Ultratek are extremely satisfied with the progress so far, they have divergent views about the next steps to take. We may find out more about the ongoing discussions between the parties during Tecogen’s third quarter conference call. No firm date has been set yet when the financials will be released, but to give an idea, last year it was on November 10th.

The refined Ultera prototype, which will be tested in an upcoming phase 3, will be a true showcase for the system, while providing a basis for accurate costing. Tecogen assumes that it will take about 1.5 years to develop a finished product.

Finally, we want to congratulate Tecogen’s management team for being so open about this issue. During the conference call we received a rare glace at the negotiations that are ongoing at a public company. We are taking advantage of this extremely low stock price to add to our position. Recommendation BUY.