Moreover, the Company acquired from Monarques Gold Corp., (TSXV – MQR) the 1.5% Net Smelter Royalty connected to the Francoeur/Arntfield gold property, which is rapidly becoming one of Globex’ key assets. When the property would reach production stage, the 1.5% NSR, was payable by Globex up to a total of $1,300,000 after which it reduced to a 0.5% NSR on all additional gold production. Globex purchased the 1.5% NSR for only $25,000. A brilliant deal!

Finally, Eros Resources Corp (TSXV – ERC) published a Preliminary Economic Assessment (PEA) on Globex’ Bell Mountain property located in Churchill County, Nevada. The study utilized a gold price of US $1,300/oz and silver price of US $17.50/oz and shows a 4 year mine life, producing 60,056 oz Au and 408,498 oz Ag. As Globex retains a 3% Gross Metal Royalty (GMR) at a gold price of over US$1,200/oz on the property, the Company could potentially earn royalty payments of approximately C$3.17 million (US$2.55 million), over the 4 year mine life. 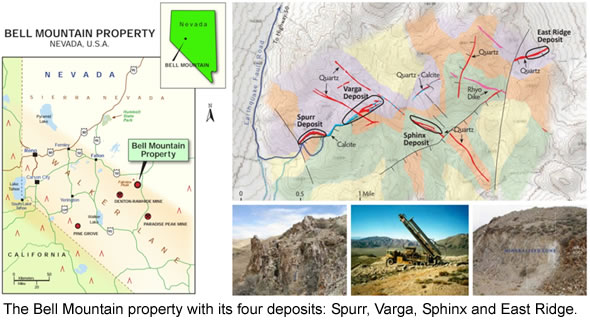 As the resource sector is picking up more speed, so is Globex’ revenue. After all, a project generator’s business model is to option out properties to third parties in exchange for a combination of cash, shares, and Gross Metal Royalties.

One of those properties from which Globex receives a monthly royalty payment is Nyrstar’s (OTC – NYRSY) Mid Tennessee zinc mine. For September 2017, Globex will soon receive a royalty of C$115,403. Since the mine restarted operations in May 2017, the monthly payments total C$551,393. Because production is still ramping up to full production, and because zinc prices have been steadily rising, royalty payments are expected to increase.

Furthermore, next week Chalice Gold Mines (TSX – CXN) will make an additional payment of $170,000 to continue optioning the Nordeau East and West properties in Quebec.

This is the true beauty of Globex. It has a steady revenue stream from option and royalty partners, which it can use to advance some of its own projects without causing dilution to its shareholders.

Late September 2017, Globex acquired the Dickenson Property, which adjoins onto the east side of the Francoeur/Arntfield gold property, located west of Rouyn-Noranda, Quebec. These claims, totaling 211.38 ha (~520 acres), add at least 1.5 km of the gold localized Francoeur/Wasa fault to Globex’ property. The Francoeur-Wasa Fault is a highly attractive area, as it is associated with six historical mines. Moreover, previous drilling on the Dickenson property revealed numerous gold intersections.

In the past week, the Company bought a royalty stream that was overhanging on the property. In order to acquire and eliminate the royalty, Globex made a one‐time $25,000 cash payment to Monarques and cancelled a 0.5% NSR payable by Monarques to Globex on 11 claims located on the eastern portion of Monarques’ Wasamac gold property. In addition, Globex has extended Monarques’ right to store Wasamac core at Globex’s Francoeur Mine site to June 30, 2019.

Globex is presently working on the Arntfield portion of the Francoeur/Arntfield property in an area near and to the southwest of the Arntfield #1 shaft where recent stripping and channel sampling have returned significant gold values from a new mineralized area.

The trenching results encompass the area around the old Arntfield mines which have produced roughly 0.5 million tonnes of Au at a grade of 3.98 g/t in the 1930’s and 1940’s. Despite Northern Miner’s assessment from the early 1990’s that there could be another 600,000 tonnes of gold ore at similar grades, the area was not mined further.

Globex can now enjoy all of the future proceeds from the Francoeur/Arntfield gold property. This again shows the commitment of the Company’s management to make the property one of its key assets.

Development work at the Bell Mountain property commenced around 1914. But it wasn’t until 1984 that the area underwent more rigorous exploration work. At least nine different mining companies drilled 298 drill holes for 62,590 ft. (19,077.4 m). Two of the companies even developed a plan for an open pit mine, but neither followed through with it despite solid results.

In 2015, Eros Resources acquired the property in return for a 3% GMR and an annual royalty of $20,000 to Globex until such time as there is production from the property.

All the work from previous owners and Eros Resources resulted in the below resource estimate.

Given these attractive results, Eros would likely immediately continue the development of the project. However, on September 1st, 2016 the US Navy applied to expand the nearby Fallon Range Training Facility and withdraw 604,789 acres of public land, an area that includes the entire Bell Mountain property.

The US Navy is currently conducting an Environmental Impact Statement (EIS) of the proposed expansion. This process is likely to last until September 2018. The result of this assessment will have to be ratified by the US government and if all sides agree with the expansion, the US Navy will likely expropriate all of the mining rights and render the project unviable.

While this creates a significant amount of uncertainty for Globex and its royalty stream, the US Navy situation creates a silver lining for the Company. If the US government does indeed expatriates the mining rights, it will likely have to compensate Eros Resources for the lost value. Eros would then in its turn have to compensate Globex as a royalty holder.

They could likely use the PEA as a third-party independent valuation and receive a compensation based on that. This would then at least partially protect the value of the project and could even expedite the collection of the expected cash flow stream. This is one of the reasons why Eros proceeded with the PEA in the first place.

If the expropriation does NOT occur and the expansion of the training facility is halted, then Eros expects the following production forecast for the project.

Taking the property into production would also be beneficial to Globex, as it would receive approximately $2.5 million in royalties over a period of four years.

Globex this week has once again shown its ability to generate meaningful revenues from its project generator business model. In just a few weeks, the Company will have received close to $1.5 million in cash and shares.

These funds will be used to acquire other attractive mineral properties, and to advance them, either to production or to ready them for optioning, joint venturing, or outright sale to a third party resource company.

The Francoeur/Arntfield property is a prime example. It was acquired by Globex a little over a year and a half ago for a 1.5% Net Smelter Royalty (NSR), which the Company now purchased for $25,000. Meanwhile, the project has been significantly advanced, as it demonstrates the potential for a large tonnage low grade near surface gold deposit. We feel that Francoeur/Arntfield alone justifies Globex current market valuation of $24.6 million. Recommendation BUY.