A preliminary fieldwork program was launched at the Surimeau project in October. Most of the structural corridors of interest identified at the property through geophysical survey interpretation are covered with a layer of overburden. However, the exploration team identified surface alteration exposed at outcrop in close proximity to the Victoria West historical target area.

Samples extracted from this outcrop zone were compelling and Renforth Resources Inc. (CA:RFR – $0.06 & US:RFHRF – $0.05 & GER:9RR – €0.03) opted to seize the opportunity to deploy a small drill to test this zone. The drill plan was designed to test a target on trend to the east of Victoria West. The mobile drill unit was able to access this section using old logging trails and quickly commenced drilling of the first hole. Renforth had expected to complete a drill fence of at least four drill holes in this program. This effective strategy orients drilling work so that each subsequent drill hole overlaps part of the previous hole, ensuring the entire lateral extension of the ‘fence’ is targeted. A total of 1000m of drilling was planned.

This week however Renforth reported that work was halted for the remainder of the year, after partial completion of the program. One may consider the glass half-full at this point. Only two drill holes were completed to their target depth. About 200m of total drill core was recovered in this program out of a plan to drill 1000 meters. The drilling rig suffered a mechanical failure while the third drill hole was in process and only 32m of core was recovered from it. Nonetheless the results from this drill program are fantastic and confirm that a mineralized system is present.

After visual inspection of the drill core, it is clear that promising stringer zones and disseminated alteration have been encountered at multiple intervals, even from the small amount of shallow drill core recovered. Sulphide minerals pyrrhotite, sphalerite and chalcopyrite were identified in both the volcanic alteration zones and the sedimentary host rock within intervals up to 13 meters of core length. 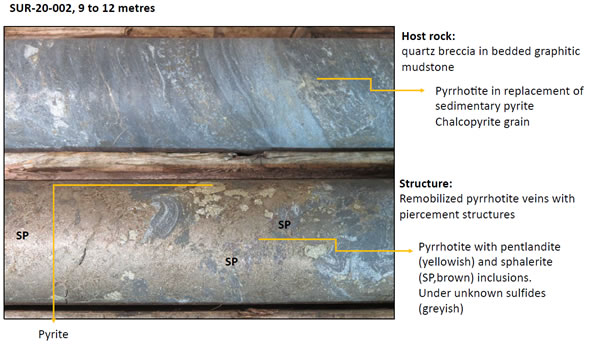 Attractive sulphide minerals present across wide intervals of alteration has provided confirmation that Renforth is on to a new VMS discovery with district-scale potential.

The mineral pyrrhotite is notable in that it occurs as part of the segregation process in layered intrusions. Sphalerite is a primary mineral of zinc. Chalcopyrite (copper sulphide) is a mineral common to most copper deposits. The presence of these minerals within significant intervals of core may be considered confirmation of a new VMS discovery zone at Surimeau.

Considering the enormous strike length of the interpreted structural corridor, and the fact that only the near surface section of this target was tested in this first drilling program, the success to encounter mineralized intercepts from the limited drill core recovered is very encouraging. The first two drill holes are roughly 200m apart and may be considered just a hint of the potential mineralized area. With more than 50kms of combined strike length in this regional system entirely within the Surimeau property holdings, Renforth is only just getting started on what amounts to a district scale discovery.

The drill core sections were split and logged, with samples selected for further evaluation at the laboratory. Meanwhile, the project geologists will have the luxury to review these sections of the subsurface geology and perhaps outline additional clues. Renforth is now awaiting the assay results before planning a follow up round of drilling to commence in 2021. The Company will look to deploy a bigger drilling rig and advance a more significant exploration program in the next round.

The primary exploration effort continues at Parbec as Renforth reported a progress update last week. Assay results have now been received for the remainder of core samples from drill hole PAR-20-100. A partial batch of assays for the first 83m of drill core was also reported for drill hole PAR-20-101. Several attractive gold zones were encountered in these drill core samples including a section of 13.2m meters just below surface with an average of 1.09 g/t gold. This chunky interval compares well with the average grade of gold mined at the Canadian Malartic mine located on the southwest boundary for Parbec.

Of note, the first two drill holes were aligned at an angle to the main structural trend in order to better intercept cross trending structures that may have been missed in previous drilling. It appears that Renforth was successful to encounter at least one new gold bearing zone through this approach. With each batch of positive data, greater clarity is achieved for resource definition. The increased drill density of the deposit also contributes to greater confidence for the overall resource estimate. And with drilling targeted to intersect gap zones between previously identified resource areas, the total defined gold resource is set to increase.

Renforth has already exceeded its original objective of 7000m of drilling for this program. The program will continue into late December. Hole 21 is currently in progress. This extensive round of drilling activity has generated a larger volume of samples submitted for assay. The backlog of laboratory results will take weeks to resolve and lead to a steady flow of assay results to be reported.

It is commendable that Renforth has been able to advance Surimeau so effectively in such a short amount of time. The Company correctly interpreted that a structural system may be present at the project. An enormous property area has now been acquired by staking to lock up most of the structural trend. Preliminary fieldwork launched at the property confirmed historic target areas, and a successful drill program was completed. All within a time span of a few months.

Visual interpretation of drill core has validated the approach. Attractive sulphide minerals present across wide intervals of alteration has provided confirmation that Renforth is on to a new VMS discovery with district-scale potential.

As Renforth’s most advanced project, Parbec also has the potential to deliver additional shareholder value through ongoing resource definition. Efforts to increase the grade, category of confidence and magnitude of gold resources within the pit shell will contribute to a higher asset value for the project. The completion of additional exploration will also make the deposit more attractive for potential acquisition by a mine developer. Investors need only review the progress leading to the transaction for New Alger earlier this year for an illustration of this outcome.

The dance card is already filling up for 2021. Renforth plans to continue advancement of drilling at Parbec. Perhaps 15,000 meters of total drilling work should provide data to significantly increase the gold resource delineated within the model pit shell. A subsequent coordinated drilling program will also be launched at Surimeau. Expectations are to advance well beyond the original drill budget for 1000 meters in the next program. The Company is fully funded to maintain its reputation as one of the most aggressive explorers in the Abitibi Greenstone Belt. Smallcaps Recommendation: BUY.