Excluding a brief pause related to the coronavirus restrictions earlier this year, Renforth Resources Inc. (CA:RFR – $0.07 & US:RFHRF – $0.06 & GER:9RR – €0.04) has maintained a steady pace of activity throughout 2020. Most of the attention was focused on the New Alger and Parbec properties and rightfully so. Parbec remains the Renforth’s advanced project with a significant established gold resource. Ongoing exploration work continues with an ambitious drilling program underway through to the end of this year. The divestiture of New Alger has now created the opportunity for the geological team to refocus its efforts on the other high quality properties.

The Surimeau project is evolving into a much more important asset in the pipeline. Renforth initially identified attractive base metals alteration at the southern extension of the West Malartic property. The Company created the new project by subdividing West Malartic and adding additional land claims to the south by staking. The consolidated property area now spans 7336 hectares in the midst of one of the most prolific exploration districts in Canada.

Scrutiny of historic exploration data and preliminary evaluation of promising outcrops suggested that these isolated mineral showings were perhaps part of a larger structural system. The exploration team reviewed regional geological information for the district. Two distinct corridors featuring mineralized bands of alteration were mapped within the property area.

Renforth has outlined this large prospect at Surimeau with established mineralized sections bearing sulphide nickel along with zinc encountered in a Volcanic Massive Sulphide setting. This potential has been almost entirely overlooked by previous operators. And the northern edge of Surimeau is positioned just four kilometers from the Cadillac Break, in one of the premier exploration districts in all of Canada. The prospect for a breakthrough discovery at Surimeau beckons.

This week, Renforth reported that a team of geologists has been dispatched to conduct extensive surface fieldwork at Surimeau. At least four defined target areas have been previously identified within the two main geological corridors. The current work will focus on the Victoria West target located to the extreme southwest of the property area. This section was discovered in the 1940s as part of a road construction program related to a hydro-electric development. A surface outcrop bearing nickel alteration attracted the interest of several exploration companies over the following years.

Previous exploration activity focused on about five kilometers of the southern corridor strike length around Victoria West. Further east along strike, the Colonie target area has also been reviewed by Renforth. Alteration zones bearing nickel and zinc have been documented at both target zones, separated by more than 10km of strike. The interval between these zones has never been explored.

Prospecting will continue at the historic mineralized zones to follow up on preliminary reconnaissance work from earlier this summer. Several grab samples had been collected that validate the reported grades by previous operators at these showings. Renforth will now advance fieldwork to revisit historic trenching sections and investigate further to the west along strike. A smaller portable drill may also be employed to collect additional sample material from near surface targets identified through prospecting.

If time and favorable weather conditions allow, the geologists will also visit the Surimau showing to the northwest. This area was not included during the summer fieldwork program. Surface prospecting and collection of grab samples is planned there.

The Surimeau fieldwork program is expected to continue for approximately four weeks. This boots-on-the-ground approach will assist with target definition for a drilling program that is in the planning stages for the months ahead.

Drill Hole PAR-20-105 was completed this week as part of the ongoing exploration program at Parbec. Extending to 831m, the drill hole is the longest yet completed by Renforth. All of the expected lithologies were encountered. Porphyrric alteration was identified, along with magnetic diorites and felsites. Similar rock types have been associated with gold values in previous drilling work on the property. These intervals are the deepest mineralization encountered by Renforth so far at Parbec. 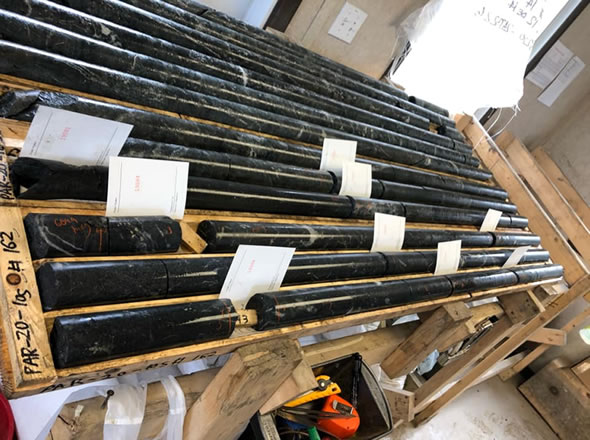 The drill was then moved further along the structure and drilling is now underway for PAR-20-106. Over 400m has been completed so far of the planned 500m total length. About 7000 meters of total drilling work is planned for this current program which is expected to continue through to the end of the year.

The drilling program is designed to further extend the deposit area both laterally and to depth. Some of the drill holes have been aligned to upgrade the drill density of near surface resource zones. All of this data then may serve to establish a much larger overall gold resource when the Company opts to update the compliant resources for the project. The potential that a high grade discovery zone may be encountered, plus the prospect for a larger gold resource to be defined, each provide further speculative upside catalysts for this story going forward as work continues.

The appeal of the Surimeau Project continues to increase as more work is completed. Renforth has captured a significant extension of both the north and south limbs of the defined structural trend within the wholly owned property area. Over 50 kilometers of combined strike is awaiting further evaluation from the geological team. For the first time, a comprehensive exploration strategy is advancing to investigate this large scale mineralized system under the direction of a single junior explorer.

Renforth was able to acquire the consolidated property area inexpensively through staking. Following up with the creative approach to interpret the individual showings as part of a larger system, the Company has now presented a geological model for a much more appealing discovery prospect. Ongoing fieldwork continues the process to establish defined targets in preparation for the maiden drilling program. With the benefit of a fully funded treasury, Renforth anticipates that a drill could be operating at Surimeau within months.

With the New Alger transaction now complete, the Company has not lost momentum. Even as the exciting drilling work continues at the flagship Parbec property, Renforth is actively advancing other properties to replicate the success story. Always an active and ambitious junior, Renforth is now operating two field programs at the same time. Renforth is demonstrating that it is a serious exploration Company with a strong ambition to achieve a major discovery at Surimeau. Smallcaps Recommendation: BUY.