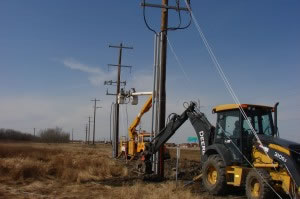 The underground utility and infrastructure division is currently operating at or near capacity and was the driver behind the Company's strong second quarter.

Thanks to an outstanding performance of its Directional Drilling & Utility Installation division, Enterprise Group Inc. (E – $0.17) recorded an income from operations of $417,000 for the second quarter, ending June 30, 2012 versus a loss of $1.16 million in the comparable period last year. Revenues for the second quarter of 2012 reached $3.89 million, up almost 49% compared with $2.62 million in the same period of 2011.

These are excellent results, not only because the second quarter is historically the slowest one for Enterprise Group, but also because it’s the fourth consecutive quarter of profitability for the Company. For the trailing twelve months ended June 30, 2012, the Company recorded income from operations of $2.2 million, or $.04 per share.

The remainder of the year looks very robust for Enterprise Group. Management expects substantial organic growth from its operations due to ongoing demand for the Company’s services. Additionally, the acquisition targets identified by the Company will also contribute to its overall growth.

A large portion of the existing underground utility infrastructure in the Province of Alberta is rapidly aging. In some areas the infrastructure begins to fail as it’s beyond its intended useful life. In response, the major stakeholders in the industry are implementing large scale, ongoing repair and replacement programs that are essential for continued growth in Alberta.

Enterprise’s customers in the utilities and infrastructure sector are companies like Fortis, which is a major electrical supplier in Canada, Telus and Bell, two important phone distributors, Shaw Cable, which does all the underground cables for internet and cable T.V., and ATCO Natural Gas, which does major gas lines.

The demand for these types of services typically peak during the summer and fall months due to increased subdivision activity and then gradually decline in the winter months due to frozen ground. This is followed by wet soil conditions in the spring due to spring thaw and rain. Although this industry is less affected by seasonality than the oilfield services industry, the spring quarter is typically its slowest quarter of the year.

Enterprise also constructs pipelines in the energy services industry throughout Western Canada utilizing a fleet of over 200 trucks and heavy construction equipment. The Company has the equipment and expertise to undertake a project from start to finish. Major projects in this industry relate to the construction of pipelines, including up to 12″ diameter steel pipe.

The Company’s earnings in the energy sector follow the seasonal activity pattern of Alberta’s oil and gas exploration industry whereby activity peaks in the winter months and declines during the spring thaw. During spring thaw, roads become incapable of supporting the heavy equipment needed to drill and tie-in oil and gas wells. As a result, demand for these types of services generally is the highest in the fall and winter quarters and the lowest in the spring quarter.

In addition to these two businesses, the Company officially launched its new heavy equipment rental division, E One Limited, in the first quarter of 2012. Construction contractors typically operate a core fleet and will rent when activity surpasses full utilization of their fleet. With presence in Central and Northern Alberta, E One is well positioned to take advantage of a broad based construction boom.

The growth in this division is largely due to an increase in projects from major customers and more seasonal soil conditions. Together, these two elements have allowed the division to operate at near full capacity for most of the year, and its operations are expected to remain at this level for the remainder of 2012 and into 2013.

The decrease in revenue for this segment is mainly due to the Company continuing its strategy of avoiding projects with smaller margins. Additionally, due to spring breakup, most of E One Limited’s rental fleet was returned during this quarter. The gross profit of this division was also negatively impacted in the second quarter as the Company incurred higher than normal advertising and promotional costs related to the launch of E One Limited. However, management does expect this division to return to making a positive contribution to the Company in the third quarter, as E One has subsequently secured several rental contracts for its equipment.

A strong contributor to the Company’s success for the past quarters is a reduction in overheads and other costs. Equipment costs, operational costs and G&A costs are continually under review. For example, during the six months ended June 30, 2012, general and administration costs, including depreciation and amortization decreased by $683 thousand compared to the same period in 2011.

Outlook for Remainder of 2012 and Beyond

The underground utility and infrastructure division is currently operating at or near capacity. The multi-year contract Enterprise signed in March of 2010, with Fortis, one of Canada’s premier power suppliers, is now well underway and revenues are increasing as production is ramped up to meet the customer’s growing demand. In addition to the contract, Enterprise’s largest customers in the underground utility and infrastructure division have a significant backlog of work that will carry through 2012.

Recognizing the opportunity at hand, management has begun executing its plan to increase this division’s production capacity by adding key personnel and equipment. In addition to organic growth, management signed a Letter Of Intent (LOI) last week to acquire a utility services & maintenance company out of Edmonton, Alberta, which will contribute significantly to the growth of this division.

The performance of the pipeline construction sector in Alberta is heavily dependent on the price of oil. With oil between $80 and $100 per barrel, capital expenditure budgets for oil companies are increasing and the energy sector is expected to continue its rapid growth. BMO analysts are forecasting that oil production in Alberta for 2012 and 2013 will be busier than the previous year.

Finally, the overall construction industry is operating at a fast pace and heavy equipment is in full demand. As a result, the Company’s new heavy equipment rental division is expected to do very well the coming quarters.

Management believes the growth potential of this division is very strong and is contemplating significant capital expenditures to increase the rental fleet. It also identified several potential acquisition targets that, when completed, will contribute to the growth of this division.

Now that the Company has been profitable for four consecutive quarters, it makes sense to take a look at what’s ahead based the results of the second half of 2011.

Due to good weather conditions, Enterprise Group’s numbers are typically higher in the second half of the year. Taking that into account, and the fact that results for the first half of 2012 are already significantly better compared with the year before thanks to increased business and cost containment, 2012 looks very promising.

Even when we use earnings of 4 cents per share for 2012, which is the absolute minimum in our opinion, and multiply those by a P/E of 13, which is reasonable for a fast growing company in the basic materials industry, we reach a $0.52 price target for Enterprise Group. Making the stock at $0.18 a serious bargain.