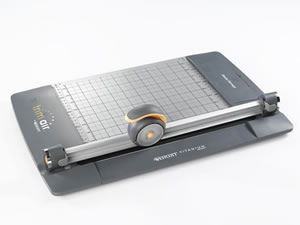 The Trimair Rotary paper trimmer combines an eye-catching design with an outstanding performance.

Acme United’s (ACU – $10.75) second quarter, ended June 30, 2012 was very strong. In fact, it were the Company’s highest quarterly sales and earnings numbers it ever achieved. Acme’s brands Westcott, Clauss, Camillus, Physicians Care and Pac-Kit all contributed to the Company’s success as each one had record quarterly sales.

The Company expects this trend to continue in the second half of 2012. Camillus knife sales will increase thanks to the Les Stroud survival knives and tools. The Westcott iPoint pencil sharpeners, Scissor Mouse and TrimAir paper trimmers continue to sell very well. And also the PhysiciansCare/Pac-Kit combination provides higher margins and broader distribution.

In June of 2012, Acme acquired certain assets of C-Thru Ruler Company, a well-known supplier of drafting, measuring, lettering and stencil products. In 2011, C-Thru’s revenues were approximately $2.5 million with gross profits reaching roughly $1 million. The C-Thru business will be largely absorbed by existing staff and facilities within Acme United. As a result, the acquisition is expected to be immediately accretive for Acme United.

We estimate earnings to reach 3.39 million in 2012, or $1.09 per share, an increase of 20% compared with fiscal year 2011. That number takes the organic growth as well as the earnings generated by C-Thru Ruler into account. We reiterate our buy recommendation for Acme United Corp. with a short term price target of $14.72, which is almost 37% above today’s stock price.