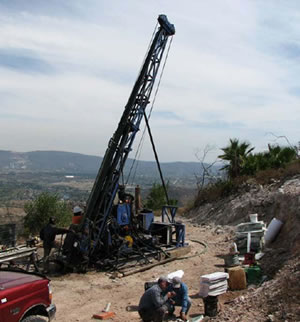 Exploration drilling at Cerro Jumil with a diamond core drill.

Cerro Jumil, Esperanza Resources’ (EPZ – $1.14) silver/gold project in Morelos State, Mexico, was described in a September 2011 Preliminary Economic Assessment, as a typical open pit, heap leachable project with an estimated average production of 106,000 ounces of gold per year, which can be mined at $499 per ounce.

Moreover, positive analytic results from an ongoing drill program should lead to a significant expansion of the property’s current resource estimate of 1.168 million gold equivalent ounces. More drilling in high prospective zones is ahead, so it wouldn’t be a surprise when the next resource estimate moves the property to 2 million gold equivalent ounces.

After completing a recently announced $30 million financing, Esperanza will be extremely well funded with approximately $45 million in the bank and about $12.3 million in marketable Global Minerals securities. This is enough to continue the development of its properties and to bring Cerro Jumil into full feasibility in the course of 2012 with the ultimate goal of advancing the property to production.

Early May 2012, Esperanza appointed Mr. Greg Smith as the new President and Chief Executive Officer and Mr. Laurence Morris as the new Chief Operating Officer of the Company. Both were previously engaged at Minefinders Corporation, which was recently acquired by Pan American Silver (TSX: PAA) in a deal valued at approximately $1.5 billion. As Cerro Jumil moves closer to production, this may be an ideal time for Mr. Smith and Mr. Morris to join Esperanza as their Minefinders past shows they have the knowledge and the necessary skills to move a project towards that goal.

In April 2008, an NI 43-101 technical report was published on the Strieborná property, which is 100% owned by Global Minerals Ltd. (CTG: TSX), which in its turn is 26.8% owned by Esperanza Resources. The report included 1.9 million tonnes in the Measured and Indicated category grading 231.7 g/t silver, 1.1% copper, and 0.7% antimony and 1.5 million tonnes in the Inferred category grading 180.0 g/t silver, 0.9% copper and 0.7% antimony. Right now, the property is being prepared for underground drilling to expand the resource.

We reiterate our buy recommendation for Esperanza Resources with a price target of $3.78 or 175% higher than today’s 30-day average stock price.