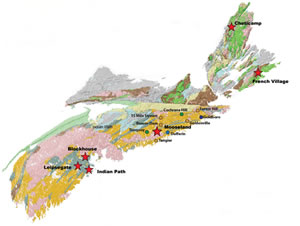 NSGold Corporation (NSX – C$0.31) provided an update on its Mooseland project, the Company’s most advanced gold deposit. It announced that the first three drill holes of a total of fifteen are completed on the East Zone of the Mooseland property.

Remember that the Company initiated a phase 1 drilling program a few weeks ago to confirm and expand the information that was already available from previous owners of Mooseland. Thirteen drill holes were first completed on the West Zone of Mooseland and now they’re going to complete work on the East Zone. Samples from West Zone holes have been shipped to Laboratoire Expert to conduct an analysis on them. These results will probably be announced in the course of November.

However, what we already do know, and what’s really important, is that NSGold reported that visible gold was observed in most of the West Zone drill holes and that all holes intercepted significant vein systems.

While outside temperatures are cooling off, this certainly isn’t the case for mining activities in Nova Scotia. In recent days, two mining Companies announced significant developments with their properties that are situated in the Mooseland vicinity.

The project operator for Goldboro, Osisko Mining Corporation, has an option to acquire a 50% interest in the Goldboro Property if it incurs at least $11.5 million in exploration and development expenditures at Goldboro in the next three years.

What Orex announced was that Osisko Mining recently completed a total of 59 drill holes, and although all of the data and results from the geological team haven’t been received yet, Osisko has confirmed it will continue to incur expenditures under the Option and Joint Venture Agreement.

In other words, Osisko is confident that a nice chunk of money can be made at Goldboro. And since Goldboro is in the proximity of Mooseland, this may also be good news for NSGold.

In other news, Globex Mining Enterprises (TSX Venture: GMX) said it acquired 100% interest in the North Star and Hurricane Point Gold Mines. These mines adjoin to the Goldboro property.

North Star and Hurricane Point are two historic mines where lots of work was conducted during the late 1800’s. And although Globex didn’t say what there next steps with the properties were going to be, it shows there’s significant interest in Nova Scotia gold properties and awareness of their potential.

With gold prices at today’s level, mining in Nova Scotia has again become very profitable. So it’s logical that mining companies are staking properties that have historically proven to contain significant amounts of gold.

The next big step for NSGold is the result of the analysis of the West Zone drill holes at Mooseland. If the high grade gold levels of previous owners are confirmed, that would be significant news.