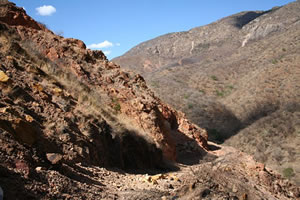 Part of the Dios Padre property from which we expect a lot in the coming months.

NSGold (NSX – $0.42) has taken the next step in spinning-out its Mexican Silver assets into a new publicly traded Company called NSX Silver Inc. At an Extraordinary General Meeting, an overwhelming 99.98% of shares voted in favor of distributing the shares of the new Company as a tax free Reduction of Capital. This was important, because now the distribution of the shares will be treated as non-taxable for most of NSGold’s shareholders where in most other cases, withholding tax would have to be paid.

It’s the Company’s goal to have the shares of NSXSilver Inc. traded on the TSX Venture Exchange in the course of January 2012 with ticker symbol NSY. NSGold’s shareholders will receive one share of NSX Silver Inc. for every share of NSGold Corp. they own.

In April 2011, NSGold signed a definitive option agreement to acquire 100% ownership of the Dios Padre Property, including the historic Dios Padre Silver Mine, located in the State of Sonora, Mexico.

In July of 2011, the Company announced that it started the process to spin-out its Mexican Silver assets for two main reasons. First, the share price of NSGold only reflected its cash position and its Nova Scotian assets (gold, base metals and rare earths), which makes it difficult to execute corporate transactions at a fair price. And secondly, some potential investors are only interested in investing in either a silver company or a gold company and not both.

In a Letter to Shareholders, Mr. Hans van Hoof, the Chairman and CEO of NSGold, made it clear he was pleased with the progress the Company had made during the past year.

Although the news flow has been relatively slow, due to the spin-out process, NSGold continues to make progress at its mining properties. Dios Padre, for example, has systematically been mapped in the past few months in preparation of an initial drill program. Drilling will commence immediately after NSX Silver’s shares have been listed.

We really expect a lot from this drill program as the Company targets to get a resource estimate at Dios Padre of at least 60 million ounces of silver, based on historic exploration programs, sampling and historic (pre 43-101) resource estimates.

Also at the Mooseland Gold property work progresses. Analytic results from the last 6 holes from its 2011 drill campaign are expected any time. These results will be incorporated into an updated NI 43-101 resource report, which will undoubtedly expand Mooseland’s current resource estimate of 390,000 ounces gold.

I can’t emphasize enough that it’s a big plus when management of a company is also a major shareholder. To distribute the new NSX Silver shares for example, NSGold opted to do this with a Reduction of Capital because this could be done tax free. Otherwise shareholders had to pay withholding tax.

Another advantage of having management as a large shareholder, is that it will try to advance the company, and its share price, while keeping dilution to a minimum.

The spin-out will have a positive effect on the valuation of all the Company’s assets.