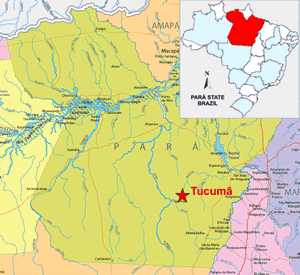 The Tucuma gold/copper property is located in the State of Para, Brazil and covers a total area of approximately 11,456 hectares.

Stronghold Brasil Mineração is a private company incorporated under the laws of Brazil and currently holds a 100% interest in the Tucuma gold project which is located in the State of Para, Brazil and consists of 6 mining concessions comprising a land package of 11,456 hectares. It is anticipated that the closing of the acquisition will occur on or before February 29, 2012.

Under the terms of the agreement, Stronghold will receive as consideration for the sale:

Kensington will also receive the infrastructure which Stronghold has built in Brazil, including the local, but very experienced, exploration team.

Because Kensington is a Capital Pool Company, trading in its shares has been halted since the Letter Of Intent for this transaction was announced in August 2011. As a result, it’s hard to put a valuation on Stronghold’s 52.3% stake.

So the $0.25 offer price may give an indication of Kensington’s stock price once it starts trading again. A stock price of $0.25 per share times 16.3 million shares, would add more than $4 million to Stronghold’s balance sheet.

Kensington intends to use the proceeds of the private placement to finance an exploration program on the Tucuma property and to build a portfolio of exploration and advanced stage gold properties in Brazil.

A Capital Pool Company is a specially created vehicle that allows access to the TSX Venture Exchange.

The exchange enables seasoned directors and officers to form a CPC with no assets other than cash and no commercial operations, which is listed on the TSX Venture Exchange to raise a pool of capital.

The CPC then uses these funds to seek out an investment opportunity in a growing business. Once the CPC has completed its “qualifying transaction” and acquired an operating Company that meets Exchange listing requirements, its shares continue trading as a regular listing on the TSX Venture Exchange.

Often the operating private business is acquired through a “reverse takeover”. Instead of paying cash for the Company being purchased, the CPC will pay with newly issued shares. Because the number of shares issued to the owners of the operating private Company often represents a majority of the outstanding shares of the CPC shell, the owners of the private Company now control the CPC.

Often, the original owners of the CPC get to keep shares in the public Company as compensation.

Historically, the Tucuma property has produced significant quantities of gold from small scale mining by artisanal miners. Therefore, the property represents an excellent opportunity to explore for both sheer hosted economic gold vein mineralization and for gold-copper systems of the IOCG (“Iron Oxide Copper Gold”) type.

From 1995 to 2006, Tucuma has been subject to exploration programs by several different companies. Work included soil and rock geochemistry, airborne and ground geophysical surveys, RC and diamond drilling. Initial diamond drill testing of this extensive gold anomaly was conducted in 1997. Historical discovery hole T97-11b tested the Filomena gold anomaly and returned 6.3 grams of gold per tonne from 54.32 m to 63.44 meters (9.12 meters), and a further intersection from 120.06 m to 134.82 m graded 6.399 grams of gold per tonne.

Next to the Filomena zone, several other areas of gold and copper/gold occurrences of the IOCG type were identified from these exploration programs and drill campaigns.

After acquiring the property in June 2010, Stronghold initiated a phase 1 drill program consisting of 6 diamond drill holes. Five holes (1,105 m of drilling) tested the Filomena target area, including the area around historic discovery hole T97-11b. The 6th hole tested another high-priority gold target on the property, named the Augusto area. Highlights of the drill results include 7.90m at 3.28 g/t Au along hole T2010-3A over the Filomena target and 7.00m at 1.32 g/t Au along hole T2010-4B over the Augusto target.

The sale of the Tucuma property to Kensington Court is a win-win situation for both Companies.