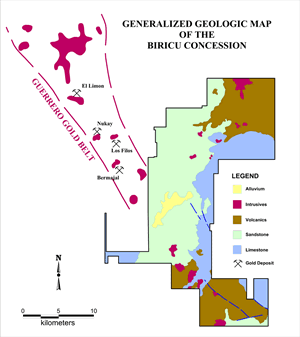 Generalized geologic map of the Biricu concession located in the Guerrero Gold Belt.

Esperanza Resources (EPZ – $1.19) entered into an option agreement with Citation Resources (CTT) in which the latter can acquire a 100% interest in Esperanza’s Biricu project in Morelos State, Mexico. Citation can acquire the 38,000 hectares property in the favorable Guerrero Gold Belt by completing $4 million in exploration expenditures within four years.

In return Esperanza will receive:

Citation apparently wants to progress rapidly with Biricu as it has already retained a technical consultant to support the direction and management of the Company’s exploration activities at the project.

With Biricu out of the way, Esperanza can again fully concentrate on advancing its flagship gold property Cerro Jumil. The 100% owned project in Mexico has an NI 43-101 compliant resource estimate of 1,168,000 gold equivalent ounces. And a September 2011 Preliminary Economic Assessment (PEA) demonstrated that Cerro Jumil is a typical open pit, heap leachable mine with an estimated average production of 106,000 ounces of gold per year, which can be mined at $499 per ounce.

Results from an ongoing drill program, designed to both upgrade part of the resource that is classified as inferred and to expand the resource, clearly indicate that the resource estimate will be expanded.

The Biricu deal is good for Esperanza as the Company didn’t have any immediate plans for the property. Moreover, when Citation finds a large enough quantity of gold at Biricu, Esperanza will receive a very nice payment and in case Citation doesn’t find enough gold to proceed with explorations, the property will return to Esperanza with a minimum of $250,000 (the Year 1 commitment) of work conducted on it at no expense for Esperanza.