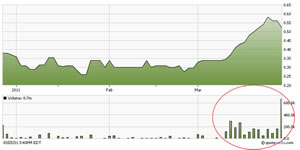 Have you noticed the extraordinary high volume of NSGold Corp. (NSX – $0.52) the past week? More than 1.1 million shares were exchanged. That’s more than 15% of all shares traded since the stock was listed in June 2010 (see chart below).

Next to the fact that the Company is probably close to signing a definitive agreement to acquire the Dios Padre silver property, the volume, most likely, was also caused by early investors in the private placement who are exercising their warrants.

Remember that each common share issued under the private placement was accompanied by one-half warrant. Each full warrant is exercisable at $0.50 per share for a period of twelve months. Now that the stock reaches this $0.50 level for the first time, undoubtedly many warrants are being exercised and the received shares are subsequently sold in the open market.

Let there be no doubt, this is a good thing. A little over 7.5 million full warrants are outstanding, which means that if they are all exercised, the Company’s bank account will be credited with more than $3.75 million. This money can be put to good use for further development of the current properties and to acquire other attractive mines.

Glenn Holmes Appointed to Board of Directors

NSGold Corp. announced this week that it appointed Glenn Holmes to the Board of Directors. Mr. Holmes has been Vice President and Chief Financial Officer of the Company since 2010.

When we interviewed Mr. Holmes back in October, we were impressed with the fact that he played a lead role in securing a US$100 million combined structured debt financing and gold hedging facility when he was CFO and Vice-President Finance for Etruscan Resources Inc. Previously Mr. Holmes was Vice-President Finance and Secretary-Treasurer for NovaGold Resources Inc. (TSX: NG).

As we wrote in our initial report on NSGold, Mr. Holmes is part of a strong management team with the right balance of financing and mining experience. As time goes by, we’re more and more convinced that the quality of a small cap Company’s management team is the key to success.

We’ve done very well with our investment in NSGold so far. The stock is up 48% since we recommended it in October 2010 (In the course of the past week even up 70% when the stock reached an all time high of $0.60).

The signing of a definite agreement for Dios Padre and the 43-101 resource estimate for the Mooseland gold property are the next milestones for NSGold. With a positive outcome, they should give the stock another boost.

By the way, we’ll soon be conducting an audio interview with NSGold’s CEO, Mr. Hans van Hoof to get an update on the Company’s progress and to discuss some of the upcoming milestones.