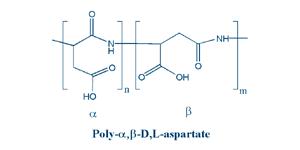 The polyaspartic acid from Flexible Solutions (see chemical formula) will soon be produced from sugar based aspartic acid.

Yesterday, Flexible Solutions (FSI – $1.72) announced strong fourth quarter and full year 2010 results. At the same time, it gave hope for an even better 2011 and beyond. The stock closed more than 16% higher on the news.

FSI’s NanoChem division, which produces polyaspartic acids (TPAs), did very well in 2010 and provided 90% of total revenues. These TPAs are employed in a variety of markets: in oilfields where they are used to reduce scale and corrosion in water systems; in the agricultural industry as crop yield enhancer; in detergents as a biodegradable substitute for poly-acrylic acid and in personal care products like shampoo to increase the hydration.

New opportunities for TPAs continue to unfold in any of the above markets. As such, the Company expects revenue growth of 15% for 2011 and 2012 from its existing product line.

As explained in “Why 2011 will be Flexible Solutions’ Breakthrough Year“, the sugar to aspartic acid plant in Alberta, Canada will be the big growth driver for FSI in the years to come. Here’s why. The major component of TPAs is aspartic acid, which is derived from oil. Currently, FSI buys all its aspartic acid in China and manufactures the TPAs in its facility in Illionois.

In the short term, taking the Alberta plant into production has the following benefits:

However, the sugar based aspartic acid has much more potential. During the conference call, Mr. O’Brien again made it clear that detergent companies are still very interested in using TPAs produced from sustainable sources. He said that the Company continues to proceed toward the first sale to one of the biggest detergent manufacturers.

Samples of TPAs made from sugar have been provided to this potential customer and it said that they work as well as oil based TPAs. To give an indication, each of these major detergent contracts are in the $10 million range and higher. The total detergent market for FSI’s product is estimated as greater than 350 million dollars per year.

Whenever a company is facing significant growth opportunities (sales times two or three), the question pops if it can handle that growth.

So one of the many good questions on yesterday’s conference call was if FSI had the infrastructure in place to handle such exponential growth. Mr. O’Brien confirmed that the Illinois plant was able of taking the Company to $30 million revenues with its current equipment and could even be expanded when necessary.

He added that the Alberta plant can supply about 75% of the aspartic acid required for $30 million revenues with sufficient expansion capacity.

Mr. O’Brien also said that the Company currently has a $1.5 million line of credit at a very attractive 4% interest rate and that the bank confirmed it is willing to expand that credit to $10 million as FSI’s inventory and receivables expand. He emphasised that diluting shareholders was “the last thing on his list”.

Flexible Solutions has a strong (if not the best) product and is active in growing markets. Crop and oil prices are high, so users have the extra money to spend on TPAs. Sales growth of 15% is definitely achievable.

When the Alberta plant comes online, we have an winning situation on our hands no matter what. The least it will do is reduce costs, but most likely it will do a lot more.