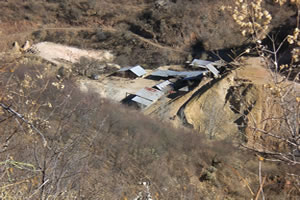 This is important. NSGold Corporation (NSX – $0.52) signed a letter of intent (LOI) to acquire 100% ownership of the Dios Padre Silver Mine in the State of Sonora, Mexico.

Potential for 100 Million Ounces of Silver

The 285 hectares property lies in the Sierra Madre Oriental, which is known to host several significant gold and silver deposits including those found in the nearby Sahuaripa, Mulatos, Dolores and Ocampo mining districts.

Dios Padre has a long and vivid history as a high grade producing open pit mine. 16 million ounces of silver (today worth approximately US$560 million) is reported to be mined between the early 17th century, which were operations directed by Jesuits, and more organized mining efforts under L.V. Limited between 1860 and 1910.

The silver deposit was formed inside a breccia pipe (see below) which is a volcanic structure that intruses into surrounding rock. That means that it extends deeper and there are more valuable materials to be found at depth, underground. So far, no reliable data exist for the underground part of the property.

The open pit part of the Dios Padre Silver Mine however has been the subject of numerous reviews and evaluations and the size of underground potential has been speculated on by a number of geologists. These historic resource estimates were summarized in a 2002 report by geologist David A. Bending as follows:

Several copper, uranium and silver deposits, located as deep as 2,000 to 4,000 feet below the surface, have been discovered based on surface exposures.

These exposures were of breccia pipes, named for their vertical or steeply inclined, pipe-like shape and the broken rock, or breccia, that fills them. The model below is not representative of the Dios Padre pipe but does give an indication of what the structure looks like in cross section.

The breccia pipe makes it clear that there’s a lot more potential for Dios Padre than what can be seen on the surface. Underground there has to be a source for the silver on top.

Additionally, numerous other mineralized areas can be seen on the property. There’s little information available about the precious metals content of these areas. An exploration and development program will have to shed light on this.

NSGold has signed a very favorable LOI. It can acquire the Dios Padre Property for a total of US$6 million payable over a five year period with early payments lower and later payments increasing. In addition the seller will receive 1.25 million common shares of NSGold, payable in five equal tranches over a 5-year period. The transaction is subject to successful completion of due diligence which has already begun.

Additionally, the Company only has to pay US$65,000 until the completion of the due diligence. The balance of the first cash payment and the first equity issuance will be triggered upon the signature of a definitive agreement.

The Dios Padre agreement is also subject to a 3% net smelter royalty in favor of the vendor. Two percent can be repurchased by NSGold at any time prior to the commencement of commercial production by the payment of US$2 million.

NSGold wants to complete its due diligence review of the Dios Padre Property, enter into a definitive agreement and prepare an up-to-date NI 43-101 compliant resource estimate all within the next 60 days.

Next, an exploration program will be designed, based on the findings of the Company’s geologists, to increase the historical resources and the knowledge of the property with the intention of returning it to production.

The Dios Padre property is estimated to hold millions of ounces of silver which can be mined relatively easily, and thus cheaply as an open pit. In addition, it could potentially hold millions more in the underground zones and on adjacent lands not previously explored.

This deal unmistakably gives NSGold a much higher valuation. When the open pit silver mine is put in production, it will give the Company the necessary cash flow to expand and acquire more high potential projects.

NSGold remains a buy recommendation. If you purchased an initial position in the past, we advise you to accumulate.