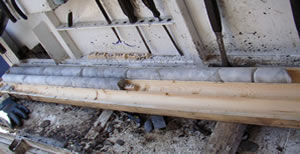 Yesterday, NSGold Corporation (NSX – $0.34) announced more drill results from its Mooseland Gold Project that confirm the potential of the property. For holes 8, 9 and 10 a total of 36 samples assayed more than 1 gram of gold per tonne of which 5 assays exceeded 10 grams per tonne (see table below).

Similar to previously announced drill results we’re seeing that throughout the Mooseland deposit there are numerous zones with quartz structures that have gold values between 0.1 and 1.0 grams. These zones are accompanied by areas with much higher gold values, which is due to the so-called “nugget-effect”.

These nuggety quartz structures are what we hoped to find because they’re perfectly minable at solid profit margins.

Past production as well as recent exploration from previous owners have outlined two interesting zones at Mooseland, the West Zone and East Zone. In total, NSGold drilled 26 holes at Mooseland, comprising about 6,500 meters, of which 13 were drilled on each zone. So far NSGold announced complete results from nine drill holes all located on the West zone of Mooseland.

What’s exciting is that reserve estimates conducted for previous owners of Mooseland all indicate that the East zone has even higher gold grades than the West zone. The Kopp estimate, for example, prepared for Hecla Mining in 1988 (not compliant with 43-101 criteria instituted after 1998), identified a gold grade of 0.585 ounces (18.20 grams) per tonne for the East zone and 0.37 ounces (11.51 grams) per tonne for the West zone.

It would be terrific news if the East zone estimates are confirmed by NSGold’s drill results.

According to what we heard our patience won’t be tested for much longer. Apparently, the first drill results from the East zone have been received from the lab and are being analyzed at this moment by the Company.

Additionally, this means the Company remains right on schedule to finish its 43-101 compliant resource estimation by the end of the first quarter of 2011.

The National Instrument 43-101 (NI 43-101) is a codified set of rules and guidelines for reporting and displaying information related to mineral properties owned by, or explored by, public companies supervised by the Canadian Securities Administrators.

The purpose of a NI 43-101 is to ensure that misleading, erroneous or fraudulent information relating to mineral properties is not published and promoted to investors.

If the Kopp estimates for the East zone are confirmed by the Company’s drilling results, we may see a next surge of NSGold’s stock price. Because the results have confirmed the estimates on the West zone, we believe they will do so as well on the East zone.

We reiterate our buy recommendation for NSGold. If you have taken an initial position when we first recommended the Company, we advise you to buy some additional shares.

Although you could wait until the results from the East zone have been announced, just remember that more certainty usually equals paying a higher price.