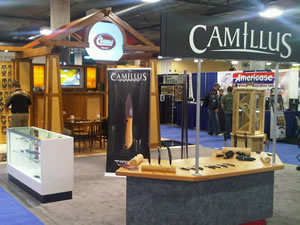 The Camillus booth at the 2011 Shot Show attracted hundreds of visitors wanting to take a look at the new knives.

January is especially exciting for Acme United (ACU – 10.23) because that’s when the Shot Show is being held, the Company’s most important sales event of the year. Each year the Shooting, Hunting and Outdoor Tradeshow attracts thousands of visitors from all over the world.

Also attending, was Rick Constantine, the Vice President of Marketing for Acme United’s Camillus and Clauss brands, and his team. He told us the show was a big success as the booth was constantly packed with people wanting to see the new Camillus knives like the Yello-Jaket, Lev-R-Lok and the Western brand knives. In addition, Camillus launched a new line of knives featuring VG10 steel.

Having many visitors is positive, but I also asked him if many orders were placed at the show, after all that’s what really matters for investors. He confirmed this and even told me that they received several international contracts.

The new Clauss garden tools are also doing well. Mr. Constantine said that all tools are now in inventory and that pre-sales numbers were actually better than expected.

He believes that garden tool sales will gradually increase and become a meaningful part of total Clauss revenues over the next several years.

The Camillus knives will be carried at many more stores in 2011 compared with last year. We’re convinced we’ll see a nice sales contribution from the new knives like the Yello-Jaket, a name that still rings like a bell with knife enthusiasts (just do a search on Google for “Yello Jaket” and you’ll see what I mean).

We also like what we hear about the Clauss garden tools. They work impeccably, have a bunch of handy features that consumers fall for and they look amazing (otherwise they wouldn’t have won 7 GOOD DESIGN awards).