News » How Surimeau Is Becoming A Monster

How Surimeau Is Becoming A Monster

A program of fieldwork was launched in the spring of this year at the Surimeau District Battery Metals project, which is 100% owned by Renforth Resources Inc. (CA:RFR – $0.03 & US:RFHRF – $0.03 & GER:9RR – €0.02). The objectives of this work included prospecting and sampling to investigate a series of new targets that had been selected based on anomalies interpreted from geophysical surveying. The targets included extensions along the Victoria West structural corridor and also portions of the Lalonde structure that had not been previously reviewed.

Renforth this week reported wonderful news, as multiple outcrops of mineralized material were encountered during the Spring program, in which a total of eight trenches were cut, five of them along the Lalonde structural target.

Among the highlights presented, the Lalonde target area has now been confirmed for at least 9kms along strike. Moreover, a parallel mineralized system has been confirmed as the north arm of the Victoria West structure.

Promising samples containing a high percentage of sulfide minerals were also extracted from many different areas of both target areas. Some of the best mineralization was encountered at Lalonde.

Based on these results, the Company has determined that a Summer fieldwork program is necessary to find out more about these attractive areas.

The Lalonde target area has become increasingly attractive for exploration since the winter geophysical survey. The exciting discovery of numerous mineralized outcrops during the Spring prospecting work added to the expectations for this underexplored area. The subsequent trenching work at LaLonde was completed roughly 3.7km to the north of the 2021 stripping program at Victoria West. The first four trenches were clustered close together with the fifth trench established about 2km to the west. The location of the trenching was selected based on geophysical targets and the proximity of these areas to existing roads. These trenches were up to 30m in length to crosscut the mineralized structures, terminating in the adjacent sediment units.

Each of the trenches encountered bands of ultramafic rocks mineralized with sulfides. Some of the adjacent sediment rock units were also mineralized. In Trench 5, a shear zone spanning 3m was encountered, with up to 30% content of sulfide minerals observed. Mineralization included sphalerite, pyrite and pyrrhotite. This section was notable due to similarities with the mineralization exposed last year at the stripped area of Victoria West. 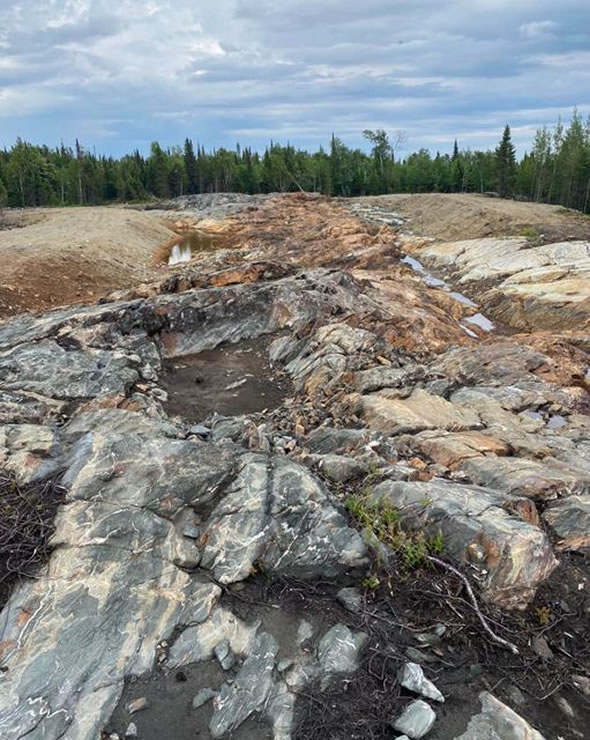 Another item of interest was a channel sample cut into a remnant pit excavation at Lalonde. Renforth had previously extracted grab samples from weathered rock of this pit in 2021. The results included elevated grades of nickel, copper and zinc. Geologists opted to cut a new channel in this exposed mineralization to get a more representative sample of the mineral content. Assay results are pending.

Mineralized Parallel System Identified to the North of Victoria West

Among the most important results achieved in the fieldwork was the confirmation of a second mineralized structure to the north of Victoria West. It is interesting to note that during the summer program in 2021, a crosscut channel was extended to the north of the main system exposed in stripping work. This crosscut ended just 40m short of the second mineralized horizon that is now being outlined.

Similar to the main structure, the new discovery commences from surface with multiple outcrops visited by the geologists. The parallel structure is located just a short distance from the main system, trending along an east-west orientation. This north arm has now been outlined for roughly 6km along strike.

Three trenches were completed at various points along the north arm of the Victoria structural corridor to expose the mineralization. Each of the trenches encountered similar polymetallic mineralization to the main Victoria West system. Bands of sulfide alteration were observed along significant portions of the trenches.

The trenches at Victoria West and Lalonde also exposed albitized ultramafics. This characteristic is yet another indication that perhaps these two separate target areas are related to a district-scale geologic event that was active across much of the Surimeau property area. Samples were selected from each of the trenched areas and submitted for laboratory assay.

Renforth is now planning additional stripping work to commence at the north arm of the Victoria system to follow up on this additional mineralization. The Company plans to complete a wide trench extending from the north through the mineralized zone and well into the sediments to the south, in an effort to ensure that all mineralized portions of this structure will be intersected by the program.

With each round of fieldwork completed by Renforth, the extent of the mineralized systems at Victoria West and Lalonde has been expanded. The target areas have advanced from conceptual interpretations based on regional geology to where they are now confirmed structural corridors extending tens of kilometers, validated through several rounds of surface prospecting, trenching and stripping, in addition to the drilling work at Victoria West. The definition of a significant emerging battery metals deposit is in process at Surimeau.

Lalonde is showing the early promise that was revealed at Victoria West. Similar mineralization has been encountered across significant widths, starting right from surface along the system. Some of the best samples have been sourced from this part of the property.

The discovery of the parallel north arm mineralization, a short distance from the Victoria West corridor, is another potential catalyst that could deliver a much larger overall deposit area. The system may extend further yet but a layer of overburden to the west prevents surface work from continuing. Prospecting is confined to where access is afforded by existing roads for now. Renforth envisions expanding the range of the next round of drilling work to target some of these new zones.

Surimeau continues to evolve as a highly prospective battery metals prospect with exciting discoveries in process. A large scale deposit of lower grade base metals starting at, or close to the surface, provides a glimpse of economic clout for the project. Two successful prospecting programs this year have generated successful results. Renforth remains focused to carry on effective exploration to build further magnitude at these exciting systems. If you don’t own shares of Renforth Resources yet, get on board, and if you already have a position, consider taking advantage of this low price to average down. Smallcaps Recommendation: BUY.