The Surimeau District Battery Metals project was initially acquired for its prospective geology, located in proximity to established mining projects. As further attention was focused on this potential, the opportunity to outline an important discovery came into focus. The enormous size of the current property represents both a challenge and a blessing. Narrowing down the many targets to focus on first is difficult. However, if Renforth Resources Inc. (CA:RFR – $0.05 & US:RFHRF – $0.04 & GER:9RR – €0.03) is able to define at least one significant deposit on the property, the control of the surrounding land holdings also becomes an extremely valuable proposition.

While previous operators have completed limited historical exploration work within the property boundary, there has never been a coordinated approach to evaluate the potential for a district-scale mineralized system. A handful of historic drill holes, along with sampling of mineralized outcrops at surface, represented a hint of the potential and a starting point for Renforth as serious exploration got underway in 2020.

The LaLonde location (in red) within the vast Surimeau property.

Surimeau now extends across an area of roughly 330 square kilometers. Effective early stage exploration is essential for a project of this size. Recall that an airborne geophysical survey was completed earlier this year to expand the database for Victoria West. The nearby LaLonde target area was also included along with a portion of the property in between the two targets.

The LaLonde target area was originally encountered in 1943 during fieldwork in the area related to construction of a hydroelectric power line. Exploration drilling in the area was completed in 1958 and 1968 by previous operators of the property. Results showed that base metals mineralization, such as copper, nickel and zinc, was present.

Renforth is the first Company to employ a systematic exploration effort for the property as a whole. This work assembles all previously reported showings as pinpoints within much larger systems of alteration. The approach has already paid off at the Victoria West target, and this week Renforth reported promising results to build the magnitude of the LaLonde target area.

Immediately following the completion of the airborne survey, a geological consulting firm began reviewing the data. High-resolution electromagnetic (EM) surveying is useful because it delineates the conductive sulphide alteration that is often encountered within base metals deposits. MAG surveying, on the other hand, is helpful to highlight VMS-style systems enriched in zinc and copper. Anomalies outlined in these surveys enabled geologists to interpret extensive structural corridors connecting many of the known mineralized showings of the project. The confidence in the process increases as the predicted targets are subsequently validated with actual sample results.

Based on the ongoing interpretation, Renforth has now outlined a prospective strike extending more than 2.4km at the LaLonde target. In effect, LaLonde is now emerging as a very promising target area with many of the same characteristics as Victoria West. And the ‘twin systems’ are separated by a distance of only 3.7kms. With at least two large mineralized systems now identified in close proximity, the outlook for a successful mine development at Surimeau has improved. Renforth plans to commence another round of fieldwork in a few weeks to continue with the early phase prospecting.

As part of the preliminary field work at Surimeau in 2020, surface prospecting was completed at several previously known outcrops, including LaLonde. A total of 34 grab samples were selected from this target demonstrating elevated levels of nickel, copper and zinc. LaLonde was noted as a potential prospect but required further investigation to merit greater attention.

Completion of the recent geophysical survey inspired Renforth to revisit LaLonde. A team of geologists was dispatched into the field as soon as the snow melted at Surimeau. Surface prospecting at the LaLonde target area was initiated where attractive EM anomalies had been highlighted. In addition, nearby outcrops of pegmatites were also sampled to determine the potential for lithium mineralization. In total, more than 400 surface samples were collected and submitted for assay, some of which demonstrated robust sulphide mineralization. One of the most visually mineralized samples so far came from the LaLonde target, estimated to contain 50-80% sulphide alteration (pyrite and sphalerite). 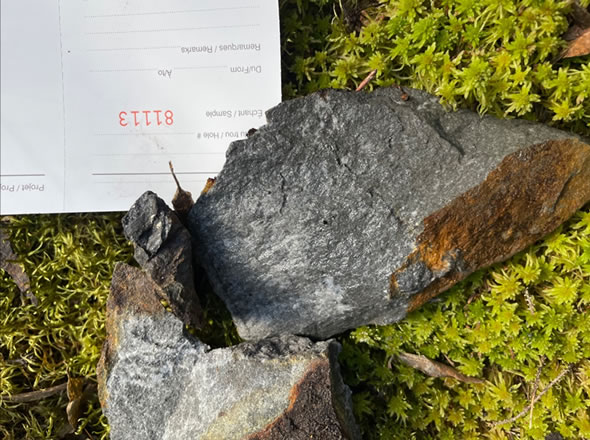 One of over 400 grab samples from Lalonde that were submitted to the lab.

Using the EM interpretation as an exploration vector has proven successful. This plan has paid off with the new discovery of mineralized outcrops encountered during this program. LaLonde is now advancing as a legitimate discovery candidate on its own merit. Moreover, since it worked at LaLonde it is reasonable to assume that the same technology will be effective to outline similar mineralization elsewhere on the property.

At least six high priority structural targets have been identified at Surimeau so far. The extensive strike length for these targets demands effective strategies to more efficiently advance exploration work. As the results of drilling and surface fieldwork at Victoria West outlined extensive systems of ultramafic and VMS mineralization, Renforth determined that airborne geophysical surveying using EM and MAG sensors would enable a much larger area to be evaluated ahead of the next round of drilling work.

With this geophysical data now in hand, the results of the program have indeed advanced the program. In addition to establishing the structural corridor further along Victoria West in greater detail, the appeal of the nearby LaLonde target is now also established. Beyond the mineralization previously identified through historic drilling work, LaLonde is now outlined for more than 2.4kms along strike.

While Renforth is waiting for the laboratory to complete sample assaying, planning is already underway for the next round of exploration work. As such, the Company continues to make solid end steady progress at Surimeau. Smallcaps Recommendation: BUY.