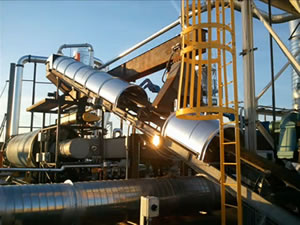 Watching the video of the Greensteam demonstration unit in action is as good as visiting the site.

Global Green Solutions (GGRN – $0.17) uploaded an informative video to its corporate website (video) which shows the entire process of the Greensteam demonstration unit at Aera Energy’s oilfield in Bakersfield, California. The video was shot during the proof of concept tests in December 2010.

Earlier this week I spoke with Craig Harting, Global Green’s COO, who said that the video is intended for potential investors and project partners that haven’t had the opportunity to visit the demonstration plant and see the operation firsthand. He said visitors to the site have been excited and impressed and hopes the video is able to communicate at least some of the same experience.

In our previous article on the market opportunity for Greensteam, we explained that its technology comes at an excellent time as emissions regulations become stricter around the globe. A few days ago, the U.S. Environmental Protection Agency (EPA) and the San Joaquin Valley Air Pollution Control District provided an example of that. They ordered two biomass power plants in California to pay combined penalties of $835,000 for emissions violations of air pollutants such as nitrogen oxides and fine particulates.

Mr. Harting also confirmed that he will do a follow-up audio interview with Smallcaps.us soon. We look forward to that.