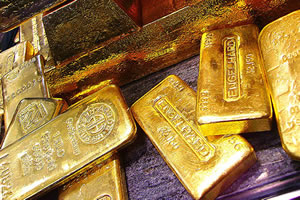 The recent dip in gold prices is a new buy opportunity.

2010 was a good year for gold. Actually, “good” is a bit of an understatement. Gold’s movement in 2010 was akin to a rocket that is launched into outer space. As you can see in the chart below, gold shot upward at the beginning of 2010, and the price never looked back as it moved from a low of $1,050 per ounce in February to a high over $1,425 per ounce in December.

In this article, we are going to discuss gold’s outlook for 2011, but in order to understand its potential movement in the New Year, it is essential to understand why it moved the way it did in 2010. If you look at the chart below, during what period was gold rising most aggressively?

If you look at the period from early August to mid-October, you will notice that gold rose aggressively from a low of just above $1,150 to a high just under $1,400. What caused this rapid two and a half month acceleration? Although there are other factors, a primary cause of gold’s appreciation during this period was the incredible uncertainty in the broader investment community concerning the economic recovery in the United States.

During the last week of July, Federal Reserve Chairman Ben Bernanke testified before Congress and stated that his economic outlook for the U.S. economy in the second half of 2010 was “unusually uncertain.” During the course of his testimony, Mr. Bernanke stated that the Fed had additional stimulus measures that it could and would use were the economy to show further signs of deterioration. This testimony from Mr. Bernanke sent financial markets spinning. Those “further measures” that he eluded to are known as quantitative easing measures, which involves the Federal Reserve increasing the money supply in hopes of easing credit markets and stimulating economic growth. A forex trader saw the effects of the market spinning out of hand as the U.S. Dollar was decimated during this same period.

Essentially, quantitative easing can be thought of as gold’s best friend. The reason is simple. When money is printed out of thin air in hopes of magically stimulating the economy (quantitative easing), people get (arguably rightly) concerned that inflation will set in to the economy at some point. Basic economic theory tells us that a country cannot increase its money supply by huge amounts without experiencing significant inflation at some point. Since the explosion of the 2008 Global Credit Crisis, the Federal Reserve has effectively created an additional 2.3 trillion U.S. dollars out of thin air. Thus, inflation is a threat in the global community, and this is a primary reason why gold rose so aggressively during those twelve weeks.

During times of inflation, when a currency loses its purchasing power, gold is seen as a store of value. In today’s age of fiat currency, where a paper currency is only backed by the government’s reputation that issues it, many investors have chosen to buy gold as hedge against wild currency fluctuations.

How Can You Position Yourself For A Potential Rise In Gold?

There are several ways, but one is to invest in gold mining companies. One such company is Canadian-based, Aurizon Mines Ltd. Aurizon had a strong year in 2010, meeting its own 2010 production goal of 141,000 ounces. In early January, Aurizon released an official statement recapping 2010 and releasing projections for 2011. In 2011, Aurizon expects to increase production to between 165,00-170,000 ounces. It is also investing heavily in expanding mining operations, as it will be exploring eight additional properties in hopes of creating further value for shareholders. In early January, Aurizon stock was trading at $6.60. Many currency traders track gold on a daily basis, and a forex course will often explain in detail how gold moves in tight correlation to specific currencies in the fx market. As with any investment, keep up-to-date with the market, learn everything about it and seek advice from professiona
ls and fellow traders before making your decision.