Global Green Preparing The Next Phase 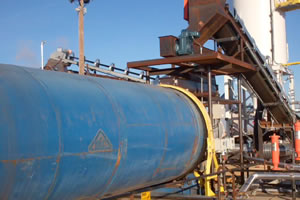 It was clear when we published the first video of Global Green Solutions’ (GGRN – $0.17) demonstration unit combusting wood biomass, that it was only going to be a matter of time before an official announcement would be made. (See next video below)

This week, the Company issued the press release in which it said that steam was successfully generated from biomass at Aera Energy’s Belridge oilfield. The Greensteam unit achieved full steam generation capacity of approximately 5.8 MW (thermal), operating exclusively on residual woody agricultural biomass fuel. The steam was supplied to Aera Energy for its enhanced oil recovery.

Craig Harting, Global Green’s COO, put it aptly when he said: “Reaching this technology demonstration milestone is incredibly important for us and a big step toward full commercialization”.

Next on the agenda is the operational testing of the demonstration unit. This is a phase in which the unit is optimized to generate a maximum output at the lowest possible emissions.

To complete the testing, and trigger the full project commercialization phase with Aera, GGRN is raising money. I heard the Company is doing a private placement at pretty attractive terms.

An attractive private placement isn’t the only thing in favor of Global Green’s case. Environmentally friendly projects continue to attract a lot of attention and Greensteam’s unique technology may set new benchmarks for 4 pollutants, which is very important as emissions regulations become stricter worldwide.

Also, don’t forget that in addition to Aera, Global Green has other North American and European opportunities in the project development pipeline.

The market immediately attached a 70% higher valuation to the Company as its stock price increased from 10 to 17 cents.

Global Green’s management met its previous targets, and I’m confident it will overcome the next hurdles as well as the risks for investors to step in are getting smaller with each milestone being reached. I’m sure many potential investors were sitting on the sideline waiting to see if the technology really worked, waiting to see if the demo unit really could be fired up. Well, the technology works, the demo unit was fired up and with planned improvements and tuning, Greensteam should provide a “best in class” biomass to energy technology.