Howe already conducted several tests, both at an already deployed REV unit at another Australian partner of EnWave, and at EnWave’s test facility in Vancouver, Canada. Now the fruit processor is ready to initiate commercial production.

Howe Farming must pay EnWave a royalty on the revenue derived from the sale of the aforementioned products. Depending on the type of products, the royalty varies between 2% and 10%.

The license is also supplemented by a 10kW REV machine purchase order, which is scheduled to be up and running at Howe Farming’s facility by January 2018. Moreover, in order for the fruit processor to retain its exclusive license for Australia, it must submit additional purchase orders for REV machinery with minimum total capacity of 240kW within twelve months of the installation of its first REV machine. EnWave is making a habit of attaching larger machine purchase orders to exclusivity contracts.

The fact that Howe is willing to commit to such significant machine purchase orders, indicates that it already has distribution lined up for its REV products. This shouldn’t come a big surprise, as Howe supplies both Woolworths and Coles grocery store chains (two of the largest in Australia) with their fresh fruits, as well as independent fruit marketers and vendors.

Howe Farming Group is one of Australia’s largest and most diverse farming enterprises. It all began in the early 1950’s with the cultivation of tobacco and vegetables on a farm in Bilwon, in the northeast of Australia.

The first bananas at Howe Farming were only harvested in 1996. It was soon noted though that the fruit was significantly brighter, larger and sweeter than other bananas grown on the coast. This was attributed to the rich, volcanic soil and the high altitude – 600m (~650 yards) above sea level – on which the farm was situated. As such, the “With Altitude” banana brand was born.

Howe Farming is currently the second biggest producer of bananas by volume in Australia, and its fruit is distributed all over the country. Although production peaks during the warm, humid months, harvest continues all year round. 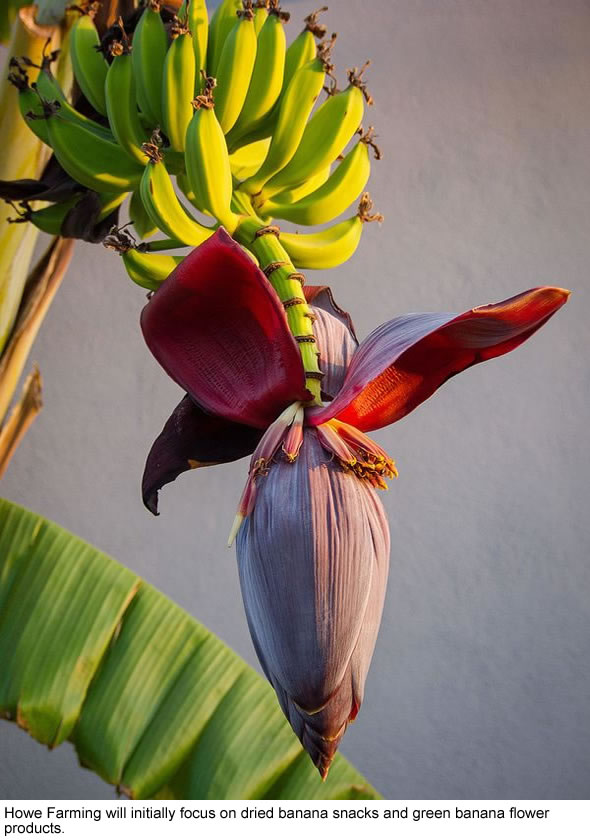 Although this is the first fruits deal for EnWave in Australia, the Company has been quite active in the region since 2016.

The initial technology evaluation agreement was closed in March 2016 with Ashgrove Cheese, a diversified Australian dairy processor. That relationship developed further earlier this year when the two parties entered into the first commercial royalty-bearing license in Australia.

The license grants Ashgrove the exclusive right to use EnWave’s Radiant Energy Vacuum technology to process cheese products in the State of Tasmania, with a goal to produce dried cheese products similar to EnWave’s Moon Cheese snacks.

In exchange for this exclusivity, Ashgrove has agreed to pay EnWave a 5% royalty on the wholesale price of all REV-dried products sold. Moreover, Ashgrove also submitted a purchase order for EnWave to deliver a 10kW commercial REV machine to initiate production.

In July 2016, EnWave also signed a technology evaluation agreement with a leading manufacturer of fresh and processed meat products. The Australasian company has rented a 10kW REV machine to conduct product tests. These tests are developing well, and market trials will be conducted later this year.

Finally, EnWave entered into two more TELOAs with Australasian companies, one being a major spice processor and the other one a meat processor.

It’s great to see that EnWave’s twenty-third commercial license is again with a leading food processor. EnWave continues to convince these large companies of the merits of its REV technology.

The fact that Howe Farming has already a vast distribution network in Australia is very helpful, and explains why it is willing to commit to such a strong increase in processing capacity in a relatively short period of time. This is obviously good news for providing EnWave an attractive royalty income.

It’s noteworthy that a recent business development trip by EnWave to further the progression of several ongoing relationships ‘down under’ was very successful. The expectation from EnWave’s management is to close several new commercial agreements in the Australasian market in the next six to twelve months. Recommendation BUY.