Earlier this year, shareholders of Globex Mining Enterprises Inc. (CA: GMX – $1.37 & US: GLBXF – $1.10 & GER: G1MN – €0.91) were the beneficiaries of a major royalty transaction. The Company announced an agreement to vend its interest in the Middle Tennessee Mines royalty to Electric Royalties Ltd. A significant cash payment has already been received by Globex. Additional payments of cash, shares and warrants are pending when the deal closes before the end of this month. Shares of Globex have traded in a much higher range since the deal was reported.

This week Globex has followed through with another impressive transaction, involving the sale of several resource property holdings to Yamana Gold Inc. The highlight of the transaction is the sale of the consolidated Francoeur/Arntfield/Lac Fortune project, located in the Abitibi of Quebec, Canada. The total value of this deal is worth more than $15 million.

The large continuous Francoeur/Arntfield/Lac Fortune gold property was patiently assembled by Globex to include several past-producing gold mines and surrounding land holdings. Remnant gold resources from the historic mines, along with new gold discoveries achieved by Globex, provided the incentive for Yamana to acquire the package. Several other property claims in Quebec were also part of the deal. However there were many factors along the way that contributed to a successful outcome.

It all began when Yamana purchased its Wasamac and Camflo Property interests through the acquisition of Monarch Mining Corporation in January of this year. This established a new core operating area for Yamana that includes advanced gold deposits and mining infrastructure. Yamana committed towards the resumption of active gold mining at these past-producing projects.

The Francoeur/Arntfield/Lac Fortune property holdings are located immediately adjacent to the Wasamac Gold Mine property. Globex already demonstrated the attractive potential for further high-grade gold discovery. Yamana made the decision to acquire these strategic interests as part of its plan to build the magnitude of its operations in Quebec. 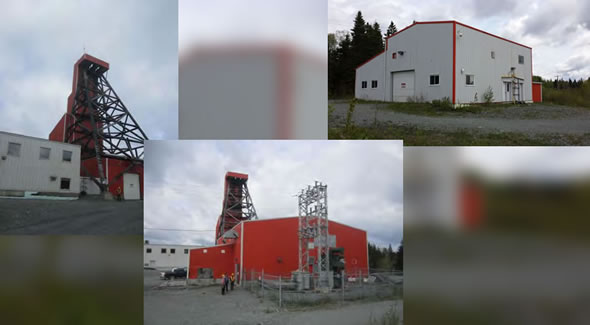 Some of the existing infrastructure on the Francoeur property

As the saying goes, sometimes it takes many years to achieve an instant success. Globex originally recognized the potential for these properties based on the historical gold mining activity in the district. In March of 2016, the Company completed a deal with Richmont Mines Inc. to secure 100% ownership of the Francoeur and Arntfield holdings. The acquisition deal included office and support buildings along with extensive underground development and mining infrastructure. Historic gold resources identified for the Francoeur mine remained open for further expansion. Globex acquired the entire property package under bargain terms.

Additional claim groups were subsequently acquired by Globex to build the consolidated property area. This included a deal in December of 2018 involving a swap of assets with Monarques Gold Corporation. The property holdings secured by Globex expanded the potential strike of newly discovered gold zones. The acquisition paid off shortly thereafter. In 2019 the Company successfully completed multiple phases of exploration programs at the project. New gold zones were discovered including surface channel sampling such as 9.52 g/t Au over 7.1 metres in the South Shear and 7.05 g/t Au over 9.5 metres in the 450 Zone, in addition to the expansion of previously defined gold deposit areas.

The final piece of the puzzle for this transaction arrived with the acquisition of the Lac Fortune property in 2020.

In addition to the Francoeur/Arntfield/Lac Fortune project, Globex also agreed to vend 30 claims in Beauchastel Township located to the east of Yamana’s Wasamac property. Three other claims in Malartic Township were also included in the transaction. The deal is scheduled to close on June 21st and will include payment of 706,714 shares of Yamana to Globex. This payment represents a value of $4 million as calculated at a deemed price of $5.66 per share.

Subsequent installment payments are due on the anniversary of the deal for the next four years. In total, Globex will receive $11 million during that term (+$15 million in total).

Another value proposition, Globex will also retain a 2% Gross Metal Royalty on all production from the consolidated property holdings involved in this deal. Yamana may purchase 0.5% of this royalty for a cash payment of $1.5 million. Considering the stated intention of Yamana to advance the core area through to resume production, this royalty interest may represent considerable value for Globex in the years ahead.

Finally, Yamana has also agreed to make payment for an environmental bond in the amount of $233,633.50 due against the property next month. Globex would have had to pay this if the deal had not been arranged.

Following so soon on the heels of a major transaction earlier this year, the arrangement with Yamana represents yet another blockbuster deal for Globex. The first installment paid in shares of Yamana will build the intrinsic value for Globex shareholders. The balance sheet for Globex is now exceptional with a large working capital position and no debt. Subsequent payments in cash and shares will provide Globex with revenue for the next four years.

The core property holdings involved in this deal were secured more than five years ago. At that time the spot price of gold was below $1000 per ounce. As a result, Globex was able to acquire properties for a bargain price. Opportunities to add strategic property claims followed. The Company assembled a larger continuous land package around the past-producing mines. Successful exploration defined a larger gold resource. Globex achieved the discovery of several horizons of gold mineralization at surface through its own exploration ambitions prior to the transaction. The full cycle strategy from acquisition through to the sale agreement directly contributed to the impressive value of this deal.

The retained royalty interest may yet deliver further long-term value. Yamana purchased these property holdings as part of its strategy to establish a core mining area. As Yamana advances mine development at Wasamac, the gold resources from the adjacent consolidated properties may then become attractive for a very low cost mine expansion plan. This would then create a revenue stream of royalty income payable to Globex.

This year, the one-two punch of royalty and property transactions validates the foresight by management to acquire assets when the opportunity to buy at bargain valuation is at hand. Globex continues to hold one of the largest suites of property and royalty assets in the entire sector.

Globex’ stock price hardly reacted to this news, which is odd considering that the total value of this deal (over $15 million) represents more than 27 cents per share of the issued Globex stock. Smallcaps Recommendation: BUY.