The spot price of silver is trending higher again at last, after a grueling bear market dragged on for nearly a decade. During the last 12 months silver roughly doubled in price from the lows. The metal is now consolidating and appears ready to break out above the $30 plateau. This recovery in silver has attracted the investment interest among junior explorers to gain leverage to silver properties. Sterling Metals Corp. (CA:SAG – $0.55 & US:SAGGF – $0.46 & GER:LACB – €0.35) was quick to recognize this trend. The Company is advancing its flagship Sail Pond project with leverage to silver and base metals.

Located on the Great Northern Peninsula of Newfoundland, Sail Pond is a large property spanning an area of 13,500 hectares. The early stage prospect has undergone several phases of surface prospecting and sampling work completed by a previous operator in 2016. Attractive grades of silver, copper, lead and zinc were encountered within quartz-carbonate veins exposed at outcrop. Significant gold content was also observed in some samples. Grab sample assay results were highlighted by grades of up to 4,526.1 g/t silver and 14.9% copper content.

A geophysical gravity survey was completed by Sterling targeting the South Zone of Sail Pond in March. Interpretation of the data has outlined a linear trend of gravity-high anomalies in proximity to prominent geological structure. Data from a previously completed Induced Polarization survey also identified attractive anomalies that overlay the same trend. This correlates well with metal in soil anomalies and higher-grade grab samples collected from outcrops. The anomalous corridor represents a high profile exploration target.

Location map of the Sail Pond Project (property) located on the Great Northern Peninsula of the island of Newfoundland.

This week Sterling reported that the maiden drilling program has commenced at Sail Pond. The ambitious effort will encompass 7500m of drilling work and is expected to take four months to complete. A program of 37 drill holes is planned, each extending about 200m in depth. The program is fully funded and all required permits have been secured. Nova Scotia-based Logan Drilling Group International has been selected as the contractor, assisted by Mercator Geological Services.

The program is considered a grass-roots level exploration effort. Prior to the fieldwork completed in 2016 there is no known historical exploration work on record. However the sampling results highlighted the discovery potential over a vast area of the property. Various rounds of geophysical surveying support the case. GoldSpot Discoveries Corp was selected by Sterling earlier this year to complete an evaluation of the geophysical data. This work identified 18 separate target areas in a trend extending more than 12km across the property. Each of these 18 priority targets will be investigated through this initial round of drilling work.

Given the extremely high grade values that were reported after the previous sampling program, the South Zone represents a logical starting point. This also serves to build anticipation as the program kicks off. The program is planned to investigate the continuity of the surface mineralization and outcrops of quartz veining. Ideally the shallow drilling will also encounter sections of alteration that confirms the effectiveness of geophysical surveying for identification of exploration targets. 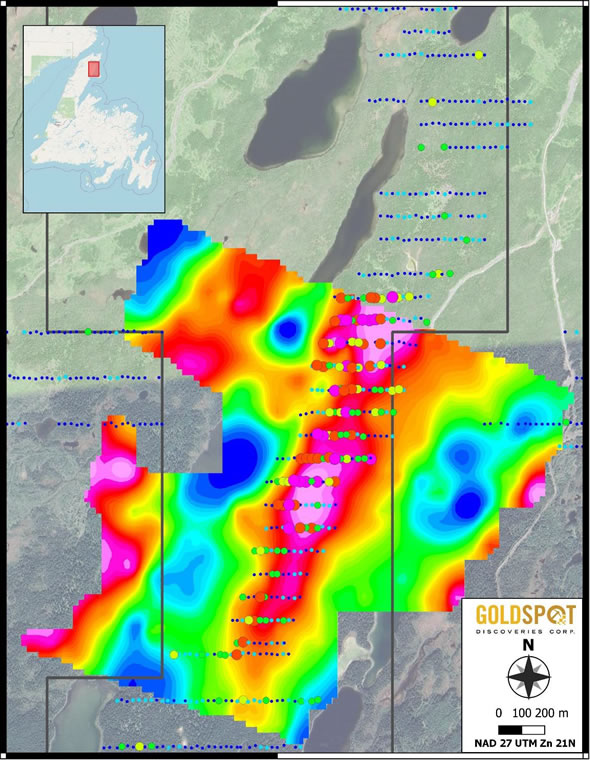 Filtered, interpreted, gravity data (in mG) on the South Zone of the Sail Pond project overlain by Lead-in-soil data. Note the very strong correlation of the gravity highs (warm colours) with the high-grade lead values.

Easy access to Sail Pond is afforded by paved highways and service roads. A local airport is located just over 30 kilometers from the project area. Drill core samples will be sent to Eastern Analytical for assaying. The results will be reported as they are received back from lab analysis.

Newfoundland is regarded as a jurisdiction that is supportive to mining and exploration activity. Numerous high value mineral discoveries have been presented within the province following centuries of historical exploration activity. Speculative interest is building locally following the high-grade gold discovery in process by New Found Gold Corp. Their Queensway project located in the central region of the island is a catalyst to attract investment to the province.

Sterling has been fortuitous to secure the right flagship asset, at just the right time and in the midst of an exploration boom in Newfoundland. The decision to rapidly move forward with a significant drilling program will be appreciated by shareholders. The greatest potential value creation for a junior explorer is achieved at the discovery level. The exploration plan will involve a large number of targets with a magnitude of drilling sufficient to achieve meaningful results for the preliminary effort.

Sail Pond appears to present an attractive profile to sustain a comprehensive exploration effort. The project covers a large area, easily accessible by road, with abundant surface showings of attractive mineralization. Sterling holds the option to earn 100% ownership of the project, with a reasonable spending commitment (the property was acquired in 2020 from Altius Minerals Inc through an option deal. Under the terms of the option deal, Sterling must complete $500,000 in exploration spending at the project by October 2021, and $1.5 million in spending by October 2023). It should be noted that the Company is committed to a successful outcome with the plans and funding to continue well beyond this maiden drilling effort.

With all of the positive circumstances in place, the overall market set up for silver and copper is favorable. Sail Pond is one of the largest early stage silver prospects scheduled for exploration in Canada. If Sterling is able to deliver appealing drill core intervals from this current program, the outlook for the Company to create shareholder value is attractive. Steady news flow in the weeks ahead will support the speculative appeal. Smallcaps Recommendation: BUY.