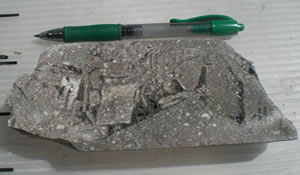 Sample of the Dios Padre drill core. Upcoming lab results will tell what it contains.

The first six holes tested the large conductive anomaly of 600 metres wide by 800 metres long, and its offshoots, which were identified during the ground-based geophysical survey late last year. The latter three holes targeted the mineralized breccia pipe beneath the historically mined Santa Gertrudis open pit.

Most interesting information came from holes 7 and 9, which were aimed to intersect the downdip extension of the breccia body underneath the Santa Gertrudis open pit.

As a reminder, the known Santa Gertrudis silver deposit was formed inside a breccia pipe, which is a volcanic pipe-like structure that intruses into surrounding rock. That means that the silver on the surface extends deeper and that more valuable materials are to be found underground. Several copper, uranium and silver deposits, located as deep as 2,000 to 4,000 feet, have been discovered based on surface exposures.

Also good to know is that the Dios Padre breccia pipe was mined underground by previous owners of the property up until 1971.

NSX Silver’s holes 7 and 9 were drilled to find out if the mineralized breccia extended deeper than the Santa Fe level, the deepest level so far mined. And it did. Both holes 7 and 9 intersected the breccia pipe several metres below the Santa Fe level. Lab results will have to tell exactly what the drill core contains, but the Company’s geologists visually identified chalcopyrite, galena, tetrahedrite, freiburgite, pyrite, and barite, mineralization that’s consistent with silver-bearing minerals seen at upper levels of the Dios Padre Mine in pit walls, stockpiles, and accessible underground workings.

Holes 1 through 4 were drilled right in the very large geophysical anomaly of 600 metres wide by 800 metres long with a depth of at least 300 metres, which lies just to the north of the most recent historic mining operations. And holes 5 and 6 were drilled in close proximity of this anomaly.

Although lab results haven’t come in yet, we’re very hopeful that the mineralization from holes 7 and 9 will contain silver. That would immediately confirm that the silver bearing breccia pipe at Dios Padre extends deeper than known so far. Deeper drilling at the breccia is currently being conducted.