News » Comprehensive Care Doubled Revenues in 2011 – Much More Expected Thanks to Pharmacy Management Program in Partnership With Largest U.S. Retailer

Comprehensive Care Doubled Revenues in 2011 – Much More Expected Thanks to Pharmacy Management Program in Partnership With Largest U.S. Retailer 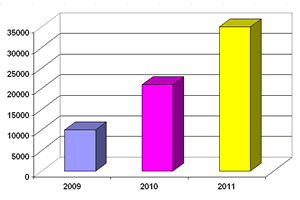 Indicative of CompCare's expansion during the last couple of years is the growth of its provider network from about 10,000 participants in 25 states in 2009 to 35,000 providers today active in 46 states, the District of Columbia and Puerto Rico.

The Company’s attractiveness today is an in-progress turnaround that started in 2009 when the current management team took a controlling position in the Company. Since taking over CompCare, the new management team invested approximately $20 million, restructured the Company and prepared it for substantial growth. This growth showed for the first time in 2011, when revenues doubled from $35 million in 2010 to $71 million in 2011.

Thanks to a recently launched innovative partnership with the largest retailer in the U.S., CompCare is able to reduce pharmacy costs by up to 10% for its health plan partners, offering them the lowest possible prices for both branded and generic drugs. CompCare has been offering this unique service since late last year and has already signed up three new contracts along with several others in the pipeline.

Next to new contracts from the Pharmacy Management Program, CompCare is also picking up contracts for managed behavioral health services. For example, it signed a new agreement with Essence Healthcare to provide services to the Medicare Advantage population in Missouri, Washington and Illinois. And it added 42,000 covered people to its existing contract with L.A. Care, the nation’s largest public health plan.

Despite these new contracts, we believe CompCare in 2012 to focus on digesting its 2011 growth and returning to profitability. At the same time, we expect substantial growth after 2012 thanks to the Pharmacy Management Program.

Based on 2012 revenue estimates of $75 million and earnings of $1.15 million, we initiate coverage of Comprehensive Care Corporation with a buy recommendation and a price target of $0.40, which is double today’s stock price. Moreover, when results of the Pharmacy Management Program start to come in, we foresee to significantly adjust our price target upwards.