News » Strong Performance Across the Board for Acme United

Strong Performance Across the Board for Acme United 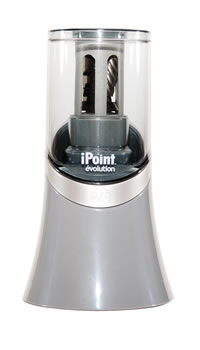 The Westcott iPoint pencil sharpener comes in many different shapes, sizes and colors, and remains one of Acme's best selling products. Above is the "green" version, made with recycled materials.

Moreover, Mr. Johnsen, the Company’s Chairman and CEO, indicated during yesterday’s conference call that the following quarters will be very good as well. Demand for the new Westcott iPoint “Whisper Quiet” pencil sharpeners, the Scissor Mouse, Camillus knives, the Les Stroud tools, and first aid products remains very high. Also back to school sales, which are significant in the second and third quarter, look very strong.

Acme United reports financial information on three separate business segments: the United States, Canada and Europe. Because exact revenues per segment for the first quarter haven’t been made public yet, we calculated them based on last year’s numbers.

In the U.S. segment, sales for the first quarter reached $12.57 million, up 19% from last year’s 10.56 million. The increase can be attributed to higher sales from iPoint pencil sharpeners, Clauss professional cutting tools, and branded first aid products. In Canada, revenues decreased 11% to about 1.66 million due to a large order in the first quarter of 2011, which didn’t happen this year. In Europe, sales climbed 32% to $2.63 million thanks to increased sales to mass market retailers. Mr. Johnsen also mentioned that the European segment was profitable during the first quarter, but that it was hard to predict if that was going to remain the case during 2012.

Overall gross margins slightly decreased from 36.9% in the first quarter of 2011 to 35.2% in the comparable quarter of 2012, mainly due to Pac-Kit, which still has somewhat lower margins than Acme’s other products.

Acme United is doing very well. Demand for its existing and new products is high and seems to remain that way in the coming quarters.

Acme’s second and third quarter are by far its most important ones thanks to back to school sales. Until we have a clearer picture of the current quarter, we’ll stick to our most recent sales projection of $82.5 million for 2012, an increase of 12.5% versus 2011. Also our earnings per share estimate of $1.02 for fiscal year 2012, up 12% compared with last year, remains unchanged.

It’s obvious that when the second quarter confirms the trend set during the first quarter, these numbers will be increased.