A typical junior exploration story will opt to control a portfolio of properties, ideally located within a high profile mining district. However, the high expenses related to even the most frugal exploration activity may put limitations on advancing work for more than one property at a time. Therefore the flagship property is often the focus for most of the exploration funding and other projects may languish on the back burner.

Renforth Resources Inc. (CA:RFR – $0.06 & US:RFHRF – $0.04 & GER:9RR – €0.04) is anything but a typical junior. Note that during the past year the Company was able to advance exploration programs at several attractive projects. A series of successful drill programs at the New Alger property led to the presentation of an attractive gold resource earlier this year. This contributed to the completion of a lucrative transaction to vend the project to Radisson Mining Resources last month.

Among the many benefits arising from this transaction, Renforth is now fully funded with an extremely strong balance sheet. The final phase of the New Alger transaction involves a private placement of flow through shares to Radisson, scheduled to close later this month. With completion of this deal, Renforth anticipates a fully funded treasury with more than $8 million in working capital. Suffice to say that the Company will not be facing urgent financial pressure for a long time to come.

The Company may now continue with its ambitious exploration plans at the other properties it controls in the prolific Cadillac Break district of Quebec. And the pace of work is not slowing down either. Earlier this month Renforth launched an aggressive diamond drilling program to advance exploration at the Parbec property.

Renforth has a budget of $1.25 million for this program. A total of at least 7,200 meters of drilling is planned in 26 drill holes. The Company is employing just a single drill rig to enable the option to evaluate each hole as it is completed. The field team then has time to react to any significant results that may be achieved. This approach is more economical and it has already proven its value in previous drilling work.

An update on the progress of the drill program was issued this week. Three holes have already been completed, including more than 1000m of drilling work. A fourth drill hole is currently underway.

It should be noted that the Cadillac Break extends laterally through the property along a northwest/southeast strike. Prior drilling efforts targeting the main vein system have been directed perpendicular to the strike of the system in order to achieve results that are most representative of the true width of the intervals encountered. However, Renforth’s geological team believes that cross trending structures may also extend beyond the main vein system. If so, the previous drill alignment would likely have missed intersecting these potential gold zones.

Drill Holes 20-100 and 20-101 were therefore aligned due north and cut the Cadillac Break at an angle (see map below). This alignment is also planned for several other drill holes in program. The Company expects that these drill holes will be more appropriately aligned to encounter any offset targets. If indeed there are gold-bearing veins offset from the main structure, the potential to prove up a larger gold resource is at hand. This is yet another benefit of the lavishly funded treasury to allow investigation of new target areas as part of a much larger overall drill program. 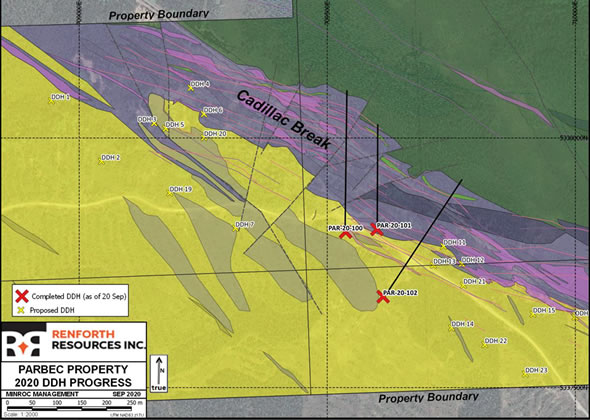 Drill Hole 20-102 was directed perpendicular to the Cadillac Break and successfully penetrated through the structure to the volcanic on the north side, after extending more than 500 meters.

The expected lithologies associated with gold bearing alteration were encountered in each hole so far, including felsites and diorites, shear zones and tuffs. In addition the ‘magnetic diorite’ zone identified in prior drilling was also intersected. The drill core was logged and split, with samples selected and submitted for assay.

It should be noted that Renforth considers the Parbec project as its flagship exploration prospect. The most advanced of its properties, an attractive gold deposit has already been established at Parbec. In May of this year, Renforth presented a resource estimate that documented a pit-constrained gold resource. This included an Indicated resource of 104,500 ounces of gold with an average grade of 1.78 g/t. A further 177,300 ounces of gold were outlined in the Inferred category at 1.77 g/t.

The Company is now advancing with its most significant diamond drilling program in many years. The overall objective will be to expand the deposit area and build the gold resource. The near surface disseminated gold deposit remains a priority target. Additional discovery potential further to depth will also be investigated.

Several areas of the currently defined deposit do not have sufficient drill density to enable calculation of resource blocks even though there is evidence of gold alteration. Infill drilling will target these sections to add gold resource ounces. More importantly, the deposit remains open both laterally and to depth. The next round of step out drilling will advance beyond previous resource zones in the expectation to expand the overall deposit area.

The downdip extension drilling further to depth is perhaps the most exciting aspect to this work. Consider that the East Amphi project immediately adjacent to Parbec has encountered gold zones below 600 meters. Other deposits further along the Cadillac Break have been proven to extend more than one thousand meters below surface. Exploration at Parbec has only just scratched the surface in comparison. Renforth believes a much more significant gold deposit awaits discovery. An updated resource estimate is planned following the program, early in 2021.

During previous exploration efforts, Renforth was restrained in the scope of its activity due to financial limitations. Nevertheless, the Company maintained a very ambitious and successful campaign to achieve impressive gold discovery zones. With the benefit of a well funded treasury, Renforth may now accelerate its activity. The opportunity is at hand to present far more significant results as the work continues.

In addition, the Company is also planning further exploration at its Surimeau and Malartic West properties. Recall that fieldwork had been underway at both projects earlier this summer and the results from surface sampling and prospecting are expected to be released shortly. Smallcaps Recommendation: BUY.