The West Malartic property was originally acquired by Renforth Resources Inc. (CA:RFR – $0.07 & US:RFHRF – $0.04 & GER:9RR – €0.04) based on proximity to the Canadian Malartic gold mine. The large land package had been overlooked by other players and was available so Renforth secured ownership in the hopes that the favorable conditions that contributed to emplace attractive gold deposit elsewhere in the district may have also been at work within this section. This tactic has been proven successful many times for other companies in other places. The presence of promising geologic formations close to established deposits – ‘closeology’- is reason enough to acquire an exploration property.

When Renforth opted to divide West Malartic and rebrand the southern portion as the Surimeau project, perhaps some people considered this a marketing tactic. However the Company was confident based on analysis of regional geology. A distinct trend of favorable rock units related to several deposits elsewhere in the district was identified, extended through Surimeau. This week Renforth provided further commentary that clearly establishes Surimeau as a unique and promising target for further investigation.

A team of six experienced and respected geologists investigated the property during the summer. This expert team understands interpretation of the regional geology and they know what to look for. Several visits were scheduled, carrying out fieldwork at selected outcrops and previously reported mineral showings. Prospecting and sampling work was completed. Based on observations by the field team and the assay results from grab samples, plus a review of the historical work carried within the property area, a geological model has been developed building the case for the Surimeau project as an exceptional exploration asset.

Two enormous mineralized systems have been outlined from this work. One extends some 30kms along strike in the northern section of the property. The other, located to the south, runs for an estimated length of 20kms. The surface area of these systems is impressive, as the corridor of alteration ranges between 500 to 1500 meters in width. That Renforth controls the entirety of two similar and highly prospective systems within one wholly owned property is exceptional, considering Surimeau is located in the midst of one of the most productive mining trends in Canada. 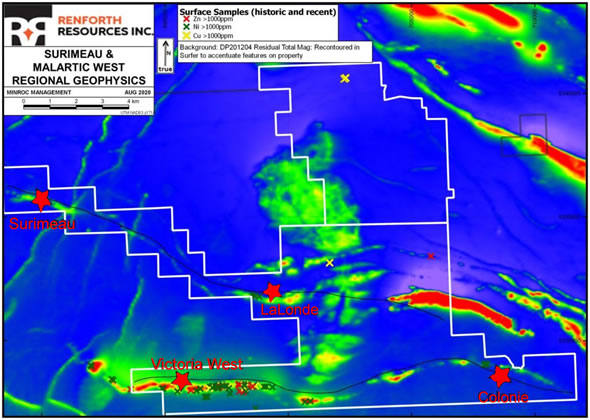 Surimeau was acquired by staking, consolidating for the first time 4 separate, historically identified, mineralized properties with a significant strike length between them.

Of note, both systems are clearly illuminated based on interpretation of geophysical surveying previously completed with an airborne MAG sensor. Historical drilling work was completed by prior operators at four areas of the property. These areas (Victoria West, Colonie, Surimeau and LaLonde) are closely aligned to the interpreted strike of the systems. Attractive grades of nickel were reported within the drill core. In addition, promising content of zinc, copper and silver was also encountered. Although the historical values of the mineral samples may not be relied upon under current standards of reporting for exploration results, they do serve as an indication that alteration zones are present within the property area.

As part of the preliminary fieldwork carried out this summer, grab samples were selected from three of the four areas where the previous drilling and trenching work had been completed. Assay values from these grab samples provided some confirmation of the historical reports including encouraging nickel content. The fieldwork also identified hydrothermal and metamorphic alteration, along with sulphide minerals observed at surface. The evidence supports the interpretation outlining a previously unmapped regional structure extending through Surimeau.

The content of Renforth’s news release this week was very technical in detail by necessity. Specific geological data and observations from fieldwork highlighted extensive areas of volcanic alteration within the property area. Renforth presented evidence that the right ‘plumbing’ to develop a deposit was in play within these linear corridors of geologic activity.

Episodes of intense geologic activity may have continued for thousands of years. Molten rock intrusions were forced close to the surface. The heat and pressure from this process led to deformation of the host rock. Circulation of acidic subsurface fluids transported dissolved metals into cracks and voids, forming structural deposit zones. Enriched fluids also reacted with favorable host rock, forming alteration zones of new minerals in localized sections of the systems.

Geologic units along strike in these systems provide evidence of interlayered sequences of volcanic rocks, with associated metamorphism, deformation and hydrothermal alteration. Previous drilling work within these systems and recent sampling programs encountered widespread sulphidation with similar minerals of nickel observed in samples extracted from different sections of the property. Multiple examples similar suites of alteration encountered along strike support the interpretation that large scale nickel-bearing systems have been identified at Surimeau.

The more active a geologic event may be, across a larger area of favorable host rock, the more likely that attractive deposits may be discovered. Therefore, demonstrating that significant geologic activity was at work within Surimeau, leading to the development of two very promising systems extending through the property, is very important from the perspective of exploration potential.

Samples extracted from the target areas included sphalerite, a mineral that is common among larger zinc-silver deposits. Pentlandite, an important nickel mineral, was also present in most samples. Volcanogenic Massive Sulphides (VMS) have been observed at several sections of the property. This type of alteration related to volcanic intrusions is commonly associated with important deposits of base metals and often gold and silver.

The presence of VMS alteration adds a third dimension to the potential target area. VMS deposits often extend to great depths below surface. Perhaps the most famous VMS deposit in Canada has been actively mined since 1988 at LaRonde. This mine is located just a short distance along the Cadillac Break from Surimeau. As the deepest gold mine operating in North America, LaRonde has produced more than 6 million ounces of gold. The mine is also a significant producer of silver, zinc and copper.

The discovery of a significant VMS deposit is usually a transformative event for an exploration story. The potential scale and magnitude of these deposits attracts speculative interest, and establishes the project on the radar screen of senior mine developers. Senior mining companies are only interested in the largest deposits and joint-venture transactions are frequently completed shortly afterwards.

It is early in the exploration process, but the evidence in hand certainly suggests there is something special awaiting discovery at Surimeau. It is extremely encouraging to outline such a large area with the characteristics that are associated with large deposits. Renforth has the opportunity to advance with ambitious exploration objectives to investigate this potential. Moreover, the timing is fortuitous because the Company is now lavishly funded to do just that.

The Cadillac Break is highly acclaimed for the endowment of many gold deposits clustered within a structural corridor. Enormously profitable base metals mines are also part of the story. VMS style deposits contribute to the mining history in this mineral belt. It is the ideal setting for a junior explorer to gain from the discovery of a new deposit.

Renforth appears to have achieved a notable breakthrough during preliminary fieldwork to outline VMS discovery potential that warrants a serious exploration effort. And once again, this was achieved at a project that had been overlooked by other operators.

Surimeau is maturing as the next high profile discovery prospect, featuring two extensive geologic systems entirely within the property boundaries. Each demonstrates early stage indications with the potential for large deposits awaiting discovery. In fact the sheer size of the outlined areas may create challenges for selection of the best targets. It is a good problem to have for a junior explorer.

Meanwhile, exploration work continues at the flagship Parbec project. Work has advanced with more than 1800 meters of drilling completed so far. The current drill hole is planned to penetrate to a length of at least 600 meters. This represents a much more ambitious effort at Parbec. Drilling to extend the gold deposit area further to depth and laterally along strike is projected to increase the total gold resources of the deposit.

Investors may look forward with confidence. Ongoing exploration at Parbec provides the speculative upside to build gold leverage. The geologic setting at the nearby Surimeau project holds great promise to develop as another exciting discovery prospect. Renforth continues to deliver as one of the most successful junior explorers within one of the best mining districts in Canada. Smallcaps Recommendation: BUY.