When someone invests in a junior gold exploration company, they usually understand what this entails. Such a company will have no revenues and be consistently in need of cash until it hopefully develops a property to the point of mining and operations, it sells the property or is bought out. This means that investors must always face the prospect of financing and dilution to their investment, as well as a risk of poor stock price performance if costs are higher than expected, or the resource find isn’t as good as hoped.

Jupiter Gold Corporation (US: JUPGF – $1.00) is suddenly a potential exception to this rule. It announced that it discovered substantial quartzite deposits in its 100%-owned Diamantina Project, located in southeastern Brazil. Brazil is a leading producer and exporter of quartzite, a mineral which is widely used for countertops and tiles. 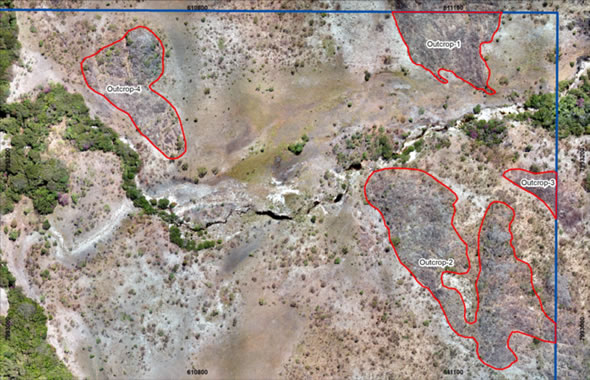 The Diamantina Project, 100% owned by Jupiter Gold, was recently being researched for gold and other metals by the Company’s technical team when four well-defined quartzite deposits were identified, as indicated in the map detail above

This discovery means that Jupiter Gold may be able to achieve significant cash flow positive operations in the reasonably near-term, unlike so many of its junior gold peers which are usually many years away from any revenue. Because Brazilian quartzite is highly sought after, we believe that the Company should have little problem finding buyers when its production begins. Jupiter Gold believes that it can start mining the quartzite deposits with a relatively simple quarry. Towards this goal, the Company has been assisted by several local experts including a mining engineer with deep expertise in both quartzite mining and its commercialization. Geological mapping, geochemical analysis of samples, detailed technical characterization of the quartzite at a specialized analytical laboratory and an aerial survey with detailed topographical mapping were all performed in this mineral right during the first three quarters of 2020. The Company now plans to file a permit to mine the resource in Q4.

Areli Nogueira, senior geologist at Jupiter Gold, echoed our thoughts on the uniqueness of Jupiter’s position after this discovery: “It is a palpable bonus as a junior mining company to have the potential for cash flows from different projects, let alone different minerals. Our team is extremely pleased with the findings announced here.”

Preliminary calculations of the quartzite indicate a potential aggregate of 3.7 million tons based on a 30-meter depth estimate for the deposit, chosen conservatively as some other known quartzite deposits in the same geological region reach 250 meters in depth. The current market price for the type and color/texture of quartzite identified in Jupiter Gold’s property ranges from $1,200 to $2,000 per ton when sold at the quarry. Since Jupiter Gold’s deposit has white and light grey quartzite which are known to be sought after, its product may command a price towards the upper portion of this range.

Jupiter Gold is trading at less than a $6 million market cap. Jupiter Gold has low overhead and fixed costs; its audited financial statements show total cash expenses below $100,000 for both 2018 and 2019. In this context, we believe that even a relatively small quartzite operation may be able to generate enough profits to make the Company cash flow positive.

Jupiter Gold is still a lightly traded stock, and we think that investors who are willing to slowly accumulate shares and wait until the market catches up to its full story may be well rewarded. Smallcaps Recommendation: BUY with a price target of $2.00.