EuroSite Power expects the installation to generate revenues of approximately US$153,000 per annum, or a total of US$2.41 million over the 15-year contract term.

The Company now has 28 units up and running, totaling 2,776kW of installed capacity. Eight more units are to be installed in the coming months, for an additional 989kW installed capacity. The total expected revenue for EuroSite Power from these 36 On-Site Utility™ agreements is approximately US$101,120,600.

When installing the highly efficient CHP unit at Kingfisher, the engineers faced some challenges. The leisure centre is entirely glass fronted and the plant room is also situated behind this glass facade. In order to install the CHP unit, specialist contractors had to remove sections of this glazing to make an opening large enough to allow the unit to be skated through and into the plant room. This was all done while Kingfisher remained open to the public and fully operational. Installation took a total of 7 weeks and included removal of a defunct, smaller CHP unit. 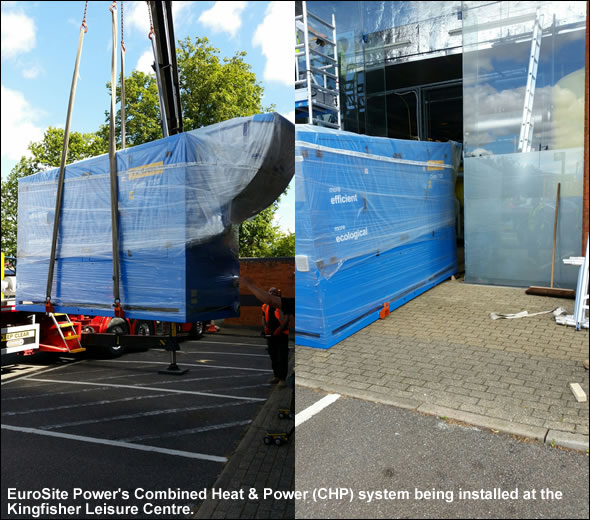 The cost to install the unit, about US$238,000, was entirely funded by EuroSite Power. The Company also pays for the gas to run the CHP system and its maintenance. As a result, there is no impact on the customer’s overhead and no additional staff required.

Kingfisher simply has to pay for the generated energy by the CHP unit, which is guaranteed to be cheaper than the displaced energy from the grid. Estimated savings for the customer are in excess of US$20,156 per year.

In addition to saving money, EuroSite Power’s systems help to conserve energy, reduce emissions and improve the environment. The particular system installed at the leisure facility will produce up to 1,484,021 kWh of total energy per year, while saving up to 234 tonnes of CO2 – equivalent to taking nearly 50 cars off the road each year. This is important, because it enables Kingfisher to benefit from government incentives, such as Enhanced Capital Allowances, that are in place in the UK.

Enhanced Capital Allowances (ECAs) are a straightforward way for a business to improve its cash flow through accelerated tax relief. The ECA scheme for Energy Saving Technologies encourages businesses to invest in energy-saving plant or machinery specified on the Energy Technology List which is managed by the Carbon Trust on behalf of the UK Government.

The ECA scheme allows businesses to write off the whole cost of the equipment against taxable profits in the year of purchase. This can provide a cash flow boost and an incentive to invest in energy-saving equipment which normally carries a price premium when compared to less efficient alternatives.

For Example, if a business pays income tax at 20%, every US$10,000 spent on qualifying equipment would reduce its tax bill in the year of purchase by US$2,000.

This compelling offer is truly what sets EuroSite Power apart. It takes full responsibility for all expenses, customers get a discount on the energy that’s used, and as a bonus, significant government incentives are offered for operating a CHP system.

As Tracey Loynds, the CEO of Kingfisher, commented: “Controlling energy costs is of the utmost importance when running a large leisure centre. EuroSite Power’s zero capital solution provides immediate, guaranteed savings so we can keep our costs down, risk free.”

EuroSite Power’s business model offers immediate, risk free savings with zero capital investment or maintenance costs for the customer. Kingfisher is expected to save approximately US$290,000 over the 15-year contract term.

Because the installed CHP systems are so energy efficient, the Company’s margins are still high enough to generate a handsome profit. As a rule, EuroSite Power targets an internal rate of return (IRR) on investments of over 20%, producing a payback period of just over four years.

As the number of CHP systems in operation grows, EuroSite Power gets closer to becoming cash flow positive. According to the management team, the company needs 45 operating units to achieve that feat, while it already has 36 contracts signed today. Buy recommendation.