Note that the Company incurred $150,000 one-time moving and severance costs during the quarter, related to the move of the Pac-Kit manufacturing operations. Excluding these costs, earnings per share would have been $0.35 in the third quarter.

During the conference call, following the announcement of the third quarter results, Walter C. Johnsen, Acme United’s Chairman and CEO, gave a sales guidance for 2015 of $115 million, and an earnings per share guidance of $1.38. If these numbers are reached, Acme would set another sales and earnings record. By comparison, in 2014 Acme had revenues of $107.2 million and earned $1.36 per share.

Before the First Aid Only acquisition, Acme United already owned two first aid brands, Pac-Kit and PhysiciansCare. Thanks to the combination of the three brands, the Company increased its volumes, and as such was able to negotiate more favorable sourcing prices for bandages, tapes, pads, etc., with its suppliers.

Now the consolidation of the three brands has entered its final stages as the production of Pac-Kit has moved from Norwalk, CT to the Company’s existing facilities in Vancouver, Washington. As such, the lease on the current Pac-Kit manufacturing plant won’t be renewed. This, together with the plant’s other fixed costs that will be eliminated, such as heat and electricity, will result in annual savings of about $450,000. These savings will go straight to Acme’s bottom line.

Next to the expected cost savings, the first aid division at Acme has several growth opportunities. First, the American National Standards Institute (ANSI) has announced its 2015 minimum requirements for workplace first aid kits and supplies. First aid kits are classified based on the assortment and quantity of first aid supplies intended to deal with most types of injuries and sudden illnesses that may be encountered in the workplace. These may include major and minor wounds; minor burns; sprains and strains; and eye injuries. It can be expected that the contents of each kit will be supplemented as needed based on the new ANSI guidelines. In fact, Acme is already shipping the first products that comply with the new requirements.

In addition, the Canadian division has received its Health Safety license, which means it can start to manufacture and assemble its own first aid kits. Also in Europe, Acme expects to receive a similar license early 2016. Although first aid sales won’t be significantly impacted right away, these licenses should have a positive effect over the longer term. 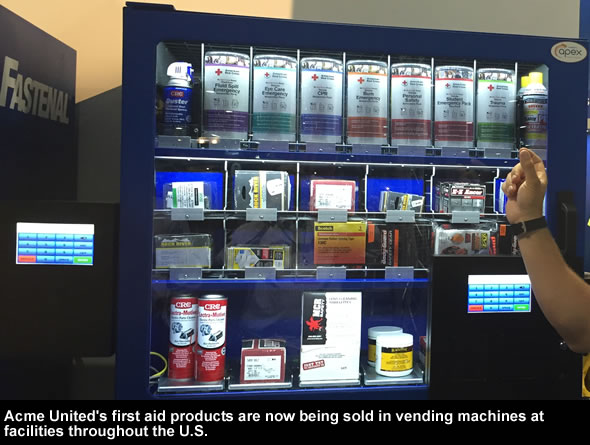 And finally, the Company started shipping refills to a large industrial wholesaler for potential use in thousands of vending machines that are placed at facilities throughout the U.S. These are products such as eye wash or to treat burns on the work floor. This is a brand new customer, that is expected to become a meaningful part of the first aid business.

Next to the first aid brands, we also foresee growth in 2016 for Acme United’s other brands. Camillus, for example, is gaining market share with its knives, and camping & hunting gear. New business has already been booked for next year.

Cuda has again broadened its distribution for 2016. And it now also offers fresh water fishing tools. At Clauss, a number of market tests with large retail chains are ongoing with strong results so far. And as for Westcott, we should start to see the full impact of the large Office Depot/Office Max scissors account for North America that Acme picked up a couple of months ago.

Note in the table below that exact revenues per segment for the third quarter 2015 will be available in the 10-Q, which will be filed mid-November 2015. However, Acme announced for each segment the percentage by which revenues increased or decreased compared with last year’s third quarter. Based on those numbers, we can give a fair estimate.

In the U.S. segment, net sales for the quarter ended September 30, 2015 increased 2% compared to the same period in 2014. Especially sales of Westcott and first aid products, which grew by 7% and 4% respectively, contributed to the success. Sales of Camillus knives, on the other hand, declined $0.7 million in the quarter due to a retail promotion in last year’s quarter that did not repeat this year. During the first nine months of 2015 sales grew 9%.

Because the U.S. dollar significantly appreciated against the euro and the Canadian dollar during the past eighteen months, Acme’s Canadian and European segments are having a tough time to maintain their margins as they buy their products in U.S. dollar. Fortunately, the currencies seem to have stabilized somewhat in recent months.

Acme United set a strong performance in the third quarter, with record back-to-school sales and record earnings. In addition, the Company is on course for a new annual sales and earnings record in 2015.

Moreover, there are plenty of reasons to be very optimistic about 2016. All of the Company’s brands are launching new exciting products for 2016, which will have a positive effect on revenues. In addition, significant cost savings will be realized with the closure of the Pac-Kit facility. And thanks to the recent devaluation of the Chinese RMB, Acme’s margins will likely increase. Buy recommendation.