The Company has engaged the well-known Canadian investment bank Cormark Securities, which has committed to buy the entire offering. 5 million units are offered at $0.80 per unit for gross proceeds to EnWave of $4 million. Furthermore, Cormark has an option to buy an additional 1.25 million units for gross proceeds of $1 million. The deal is scheduled to close in a couple of weeks.

Each unit comprises one share and half a warrant, with each whole warrant entitling its holder to purchase one share at $1.20 for a 5 year period.

A bought deal is a securities offering where an underwriter, such as an investment bank, purchases securities from the client company. The advantage of a bought deal, from the issuer’s perspective, is that it eliminates the financing risk. This way, it is ensured that it will raise the intended amount of funds needed from the securities offering. The underwriter basically takes all the risk, because it must try to sell the securities to other investors. In return, the underwriter negotiates a discount, compared with the current market price, when buying the offering from the client.

We heard that the response to the bought deal is overwhelmingly positive. Many existing and new institutional investors have come forward to participate in de financing. Based on that information, we’re confident that EnWave will be able to raise the full $5 million.

New Purchase Orders on the Horizon

The net proceeds of the offering will mostly be used for machine fabrications. Looking at the impressive list of machine purchase orders that EnWave in recent months received, and its pipeline of potential sales, it’s only logical that more capital was needed. Depending on its size, a Radiant Energy Vacuum (REV) machine costs between $1 million and $5 million. 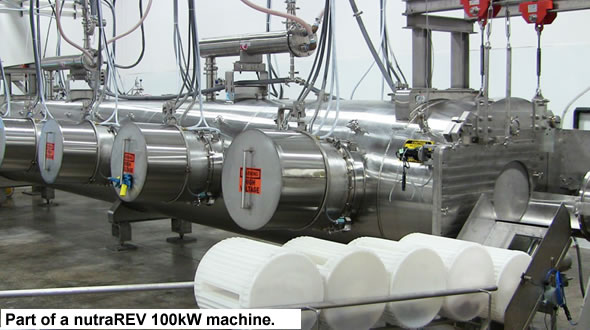 In past updates, we’ve made it abundantly clear that Starbucks customers like Moon Cheese. The coffee chain has already extended the availability of the snacks in 3,400 of its stores until the end of 2015. The chances of NutraDried, the producer of Moon Cheese, having to buy an additional REV machine to meet the demand, is high.

Also the CEO of Bonduelle Canada, Mr. Daniel Vielfaure, has more than once raved about the many virtues of EnWave’s REV dried vegetables. Bonduelle is already collaborating with EnWave to finalize the design and construction of a 300kW quantaREV machine for potential future use.

Note that the table above only partially lists the anticipated orders that the Company has made public. Undoubtedly there are many more potential orders of which we know nothing about.

For example, Milne Fruit Products, the Washington based food processor, recently announced that it had to ramp up its production to satisfy significant orders from several major food companies. How long can they supply those companies with one REV unit?

EnWave will at least receive $4 million, and possibly $5 million, from the ongoing financing. That, along with its current cash position of approximately $1 million, should give the Company about $6 million in the bank.

On top of that, EnWave may receive $1.4 million, which is currently tied up as collateral in regards to the completion of a machine by its German subsidiary Hans Binder. When the machine is successfully commissioned, part or whole of these funds will be returned to EnWave.

EnWave is clearly at the end of its de-risking cycle. It has a proven technology that’s unlike anything in the industry. There’s an enormous market potential in the food and biopharmaceutical spaces for its REV dryers. And it now has enough cash to support its growth.

The growing number of operational REV machines will increase EnWave’s royalty income. And with each additional unit installed, the Company edges closer to becoming cash flow and net income positive. If you don’t own shares yet, get on board, and if you already have a position, consider taking advantage of this low price to average down.