EuroSite Power (EUSP – $0.80), which sells the energy produced from onsite energy systems as an alternative to the outright sale of energy equipment, has signed its first gas resale agreement with an existing on-site utility customer.

Under the agreement the customer, Abbeycroft Leisure, will purchase natural gas from EuroSite Power for three of its sites, two of which have a Combined Heat & Power (CHP) unit installed. The agreement has an initial term of 12 months, beginning May 1, 2016.

This is the first EuroSite Power customer to take advantage of the Company’s natural gas purchase arrangement with Corona Energy. The major advantage is that EuroSite is able to purchase gas at much lower rates than most of its customers. In fact, compared with its current tariffs Abbeycroft Leisure will pay 42% less for its consumed gas after May1st.

Given these extraordinary savings, the Company feels confident that many more of its customers will execute similar gas resale agreements in the coming months.

While the customer benefits from lower gas tariffs EuroSite Power benefits as it sells the gas to its customers with a markup. It also lowers the cost of the gas used in its CHP units and consequently, the Company increases both its revenues and margins. In fact, it’s estimated that the contract with Abbeycroft Leisure will result in revenues rising by 21% and Margins increasing by as much as 24%. Similar benefits could be enjoyed if a majority of the Company’s other existing on-site utility customers sign similar gas resale agreements.

EuroSite Power’s Managing Director Paul Hamblyn commented, “Gas resale agreements allow EuroSite Power to offer yet another source of savings to our customers while also improving site economics and margin stability for the Company, a win-win for all parties.”

In November of last year, EuroSite Power reached an arrangement with Corona Energy, a leading independent energy supplier in the UK, to buy natural gas at very favorable prices on a site by site basis. Because EuroSite had 30 operating units, the combined amount of gas that these machines consume was large enough to negotiate a much lower tariff with a single gas supplier.

Before the agreement with Abbeycroft Leisure, each of EuroSite Power’s customers bought gas from a gas supplier at a regular (retail) price, and EuroSite Power paid the exact same amount to the customer for the gas consumed by the Combined Heat & Power (CHP) unit. Now, EuroSite Power buys gas from Corona Energy and resells it to its customers with a profit.

Natural gas is a very important part of EuroSite’s business, as its CHPs convert natural gas into electricity and heat. In fact, the price which EuroSite pays for gas constitutes around 60% of the Company’s total operating cost.

So by lowering the cost of gas at each customer’s site, EuroSite Power enjoys higher gross margins. The Company also increases its revenues by selling gas to its customers, which is used by the sites’ boilers or for catering purposes. Interesting to know is that the gas used for non-CHP purposes is sold at a higher rate, which again is beneficial to EuroSite’s margins.

First, an InVerde 100kW CHP unit was installed at Haverhill Leisure Centre to produce electricity, heating and domestic hot water for the centre. Because the Leisure Trust opted for the Company’s On-Site Utility solution, the centre only has to pay for the energy used and avoids all capital, installation and operating costs. The Company also handles all service, maintenance and repair. Consequently, Haverhill Leisure doesn’t need to provide manpower to support the energy equipment.

In addition, the Company installed a gas engine heat pump at Haverhill to provide air-conditioning to a number of the leisure centre’s fitness suites and its café area. The total value of the Haverhill Leisure account is about $2.46 (£1.75) million over the 15-year contract term. 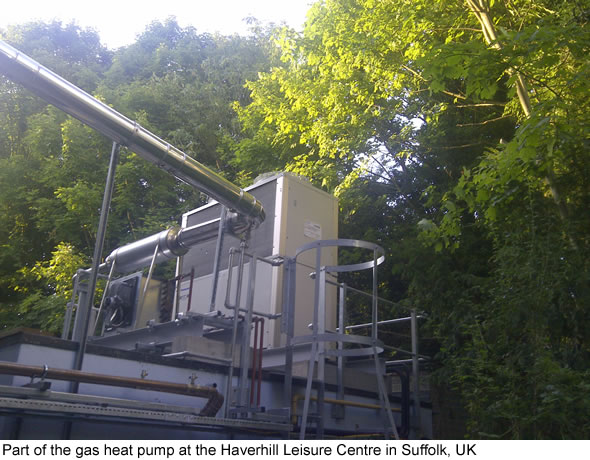 And in 2014, EuroSite Power installed a 100kW CHP system at Bury St Edmunds. This unit generates approximately 1.6GWh of total energy per annum while saving up to 240 tonnes of CO2 each year. The agreement is worth an estimated $3.1 (£2.2) million over the life of the contract.

Simon Ginders-Coxshall, Operations Director of Abbeycroft Leisure said: “Like any business we need to keep our operating costs under control and as energy prices continue to rise we needed to find a solution to keep these rises under control too. EuroSite Power’s combination of zero upfront capital cost with pay-as-you-go energy has proven the ideal solution.”

As of May 1, 2016 EuroSite Power will supply natural gas to Haverhill and Bury St Edmunds, along with The Gym site where no CHP is installed, because there’s no need for large quantities of hot water.

Thanks to this agreement, Abbeycroft Leisure is expected to save over £80,000 on their total annual gas and heat bills for the three sites.

This new gas supply arrangement is a win-win for both EuroSite Power and its customers. The agreement allows EuroSite Power to substantially reduce the price paid for gas consumed by its installed machinery and allows the customers to purchase gas at a discount for their other applications.

EuroSite Power currently has 30 operational systems. About 60% of those can significantly reduce their costs by switching to the Company’s gas supply offer. Now that the initial customer has signed up, we expect many more to follow in the coming months.

As a result of the deal with Abbeycroft Leisure, EuroSite’s revenues from the two sites fitted with an on-site utility unit are expected to increase by about 21%. Moreover, the Company’s overall gross margins are estimated to increase by around 24%. Buy recommendation.