Only a couple of weeks after EnWave Corp (TSXV:ENW – $0.79 CAD & OTC:NWVCF – $0.63 USD) signed its seventh commercial royalty-bearing license for cheese production, it again expanded its presence in the dried dairy market segment.

The new technology evaluation agreement was closed with a major Australasian dairy company. It will rent a 10kW commercial-scale Radiant Energy Vacuum (REV) dehydration machine during three months, to conduct product and market tests. The machine should arrive in the coming days.

If these tests go well, a license negotiation process will be initiated, which will include machine purchase orders to satisfy the dairy company’s throughput for this product.

Very interesting to know is that the Australasian firm has already allocated capital to establish a processing plant for this particular product application. This indicates that they’re quite sure the tests will have a positive outcome.

Dairy, next to meat, fruits and vegetables, is clearly one of the strong growth drivers for EnWave. In total, the Company has partnered with nine dairy related firms, seven of which have already signed a commercial royalty bearing license for the production of cheese snacks. Typically royalties for these types of products vary between 3% and 5%.

Below are the seven companies with whom EnWave has signed an agreement for the production of dried cheese snacks.

The fact that these companies are active in various parts of the world, has everything to do with the geographic exclusivity that EnWave grants to its partners. With the Australasian company, another new region may potentially be added to the above list. 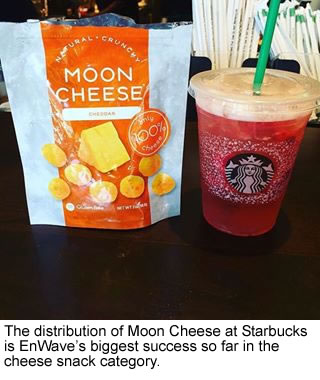 There clearly continues to be strong momentum in the dairy market segment for EnWave. It has already closed seven commercial agreements for dried cheese snacks and it has active R&D agreements in place for certain yogurt application developments. In addition, the Company has also identified milk proteins as a potential commercialization area in the future.

Although no specifics were released, we know from market research that especially in Australia there are several massive dairy companies active. Consequently, we’re convinced that if the partner in this agreement is such an Australian company, and if the upcoming product and market tests are positive, then this deal could potentially yield significant revenues for EnWave.

Also very interesting to see is the very short test period that EnWave allowed its potential partner to make a decision if it wants to move forward. This again indicates that EnWave’s negotiating position is getting much stronger. As a result, it can enforce bigger and better deals in return for certain product and geographic exclusivity. Buy recommendation.