Especially booming sales of Moon Cheese, the crunchy cheese snacks produced by EnWave’s 100% owned subsidiary NutraDried, contributed to this outstanding performance. In fact, NutraDried recorded the highest quarterly sales ever in the fourth quarter of 2018.

Next to the outstanding financials, EnWave also announced this week that it had signed an Equipment Purchase Agreement with Milne Fruit Products d.b.a. Milne MicroDried Inc. to provide Milne with its third 120kW Radiant Energy Vacuum machine for the production of an extensive portfolio of dried vegetable and fruit applications. Milne is already one of EnWave’s largest customers with more than 50 consumer products on the market today that use its MicroDried ingredients. 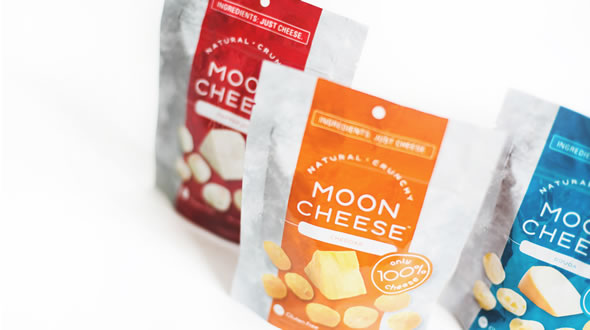 NutraDried’s rise in revenue and profitability was due to the fact that it significantly expanded its distribution of Moon Cheese throughout Canada and the U.S. in 2018. The Company also increased marketing at the regional level in the U.S. to improve consumer awareness with the goal of creating further demand pull.

Currently, the 10oz Club Pack is distributed only through Costco. However, NutraDried is targeting additional Club Pack distribution opportunities. NutraDried’s strategy is to further grow revenue and profitability by leveraging its network of food brokers in the United States, as well as by further investing in marketing activities to increase consumer demand and awareness for Moon Cheese.

In order to fulfill the ever higher demand, NutraDried commissioned a second 100kW nutraREV machine in September 2018 at its Ferndale facility, doubling its production capacity for Moon Cheese. This second REV unit is currently also running at full capacity.

It also expanded its packaging and warehousing capacities through the purchase of additional manufacturing equipment to match processing capacity with the additional dehydration capacity. We understand that the conservative guidance for total NutraDried sales in fiscal year 2019 is around $25 million.

To further increase sales, NutraDried may soon launch a couple of Moon Cheese extension products coined “Moon Cheese Mixems”. For example, different types of cheese will be dried and mixed with a dehydrated tomato. In addition, a Moon Cheese salad topper will be launched as an alternative to croutons. These will be distributed through the existing Moon Cheese channels.

For the full year, EnWave Canada achieved revenue of $6.32 million and NutraDried $16.50 million, compared to $9.40 million and $6.56 million, respectively, in the same period of the prior year.

EnWave’s current sales pipeline comprises of 11 companies that have entered into a Technology Evaluation and License Option Agreement (“TELOA”) as well as many earlier-stage prospects that are in active discussions about using REV for applications in the dairy, fruit products, vegetable products, meat products, and cannabis verticals.

The strategy under these arrangements is to co-develop product applications using the technology for specific partner opportunities and to ultimately convert them into Commercial License Agreements (CLAs). EnWave does earn revenue under TELOAs from short-term REV machine rentals as well as fees for access to EnWave’s R&D facilities and product development expertise.

The Company anticipates several long-term projects in the pipeline to convert to CLAs as well as additional REV machine capacity to be ordered by existing partners in 2019.

One such order on which the investment community is waiting for is the follow up order from Bonduelle for a large 300kW quantaREV machine. As the multinational food processor’s commercial success of its InFlavor products continues to increase, the production capacity of its 120kW REV machine, currently in operation, has to be near its limit.

Another major expansion that everybody is looking forward to in the new year is situated in the cannabis space. In October 2017, EnWave signed a royalty-bearing CLA with Tilray, a large, well established Canadian medical cannabis licensed producer. Tilray will pay EnWave royalties based on the units of cannabis dried using EnWave’s technology.

So far, Tilray has purchased a 10kW REV machine for R&D purposes and two 60kW continuous REV machines for the dehydration of cannabis in Canada and Portugal. The first 60kW processing line is scheduled to be installed in early 2019 at Tilray’s new Ontario production facility.

There may also be some further exciting developments from the US Army Natick Soldier R&D Center (NSRDEC). On July 30, 2018, this organization purchased a 10kW REV machine for research and development purposes. EnWave and the NSRDEC are conducting a collaborative R&D project for the development of nutrient rich field rations for soldiers. This opportunity for EnWave is enormous, as potentially hundreds of thousands of men and women in active duty could be served REV-dried rations.

EnWave and the NSRDEC are currently looking to collaborate with potential vendors to manufacture and supply REV-dried nutrient rich field rations moving forward.

EnWave performed extremely well in fiscal year 2018. Annual sales increased 43% and its balance is very strong. As for 2019, we expect another strong surge in NutraDried sales to at least $25 million, a boost in total royalties to $2.5 million, and some significant machine purchase orders.

In case you want to buy your loves ones a Christmas gift that they’ll be able to enjoy for many years, here’s your chance. Recommendation: BUY.