The trend of positive news flow has continued for EnWave Corporation (TSXV: ENW – $1.23 CAD & OTC: NWVCF – $0.97 USD & Frankfurt: E4U – €0.83 EUR) as the Company advances along the growth curve for its Radiant Energy Vacuum (REV) technology. This week EnWave reported yet another sale of a REV machine, after closing a deal with the United States Army Natick Soldier Research, Development and Engineering Center (NSRDEC). Like many of the recent sales announced by EnWave, the significance of this deal goes far beyond the value of the machine involved.

The NSRDEC facility is focused towards development and implementation of new technologies that can improve the combat effectiveness for the US Army. Collaboration with EnWave has been underway for several months, as NSRDEC aspires to develop new options for its Meals Ready to Eat (MRE) rations that are lightweight, nutritious, and durable in the field for military deployments, and yet are also appealing and flavorful.

Initial testing using REV processing has delivered positive results that meet the expectations of the program. Most recently, the newly developed REV dried MREs were presented as part of a prestigious event held at the Pentagon courtyard to showcase advances with the field rations under development.

The NSRDEC decision to move forward with the purchase of its own REV machine is important for several reasons. The development process had been encountering delays and bottlenecks due to limited availability of the rental machine at the EnWave test facility in Vancouver. This in itself is a very positive circumstance as it illustrates the demand for REV processing among many other companies such that the rental machine was frequently fully booked. But more to the point, the urgency to secure a dedicated REV machine entirely for the ongoing development with NSRDEC is a clear indication that the new MREs are considered to be a very good prospect for successful adoption as part of the combat rations for the US Army.

With any new sales agreement, the next logical consideration is the size of the market. With NSRDEC, the ‘market’ is the US Army. Therefore the implications of this smaller REV unit sale could become a major magnitude event. The purchase of the new REV machine for the program can thus be considered as an acceleration of the development process with an improved outlook to eventually secure a very large production deal on behalf of the US Army.

It is also of note that the NSRDEC procurement process involves intense scrutiny to review service providers prior to engaging in a collaborative arrangement or contemplating long term supply contracts. The fact that EnWave has successfully navigated through this process represents yet another validation for the corporation and the REV technology.

If indeed the approval is granted to commence production of the MREs under development, EnWave would then partner with approved vendors already supplying the US Army and enter negotiations for REV machine sales and royalty payment streams.

Doctor Tom Yang, the driving force behind the project at NSRDEC, has also made inroads with NASA to discuss a potential program to develop similar food items for the U.S. space program. A meeting is scheduled in September and if there is support to move forward, it could potentially become a “stellar” event for EnWave.

While the market for such a product line may not be overly significant, the promotional aspect of this potential collaboration would be enormous for the Company going forward. Imagine, REV dried foods in space! 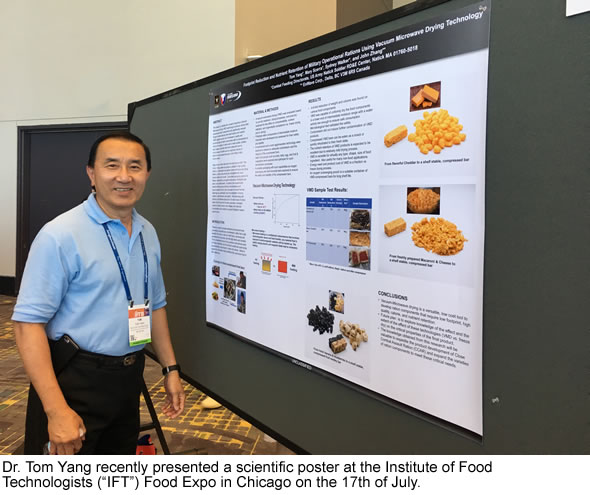 EnWave’s corporate strategy involves pursuit of a wide range of intriguing avenues to build greater cumulative leverage for its REV technology. The approach to having multiple irons in the fire is now paying off as new contract agreements are reported on a monthly basis and lucrative new applications for REV processing are developed.

The decision by NSRDEC to purchase its own REV machine to accelerate development is a very positive indication that a large new sales agreement may be on the way. A contract to supply U.S. troops, would most likely be of a much bigger magnitude than the sales agreements currently in hand. Moreover, this could also springboard the Company forward to new sales channels, just on the basis of the positive association created by such a partnership, and the implied validation of the technology itself.

The exciting potential of a similar breakthrough with NASA may also be on deck. EnWave has demonstrated its competency to market the technology and leverage future opportunities from the success stories in hand. The potential addition of high profile marketing stories like combat rations for the US Army, or nutritious high-tech meals for the space program, will further boost the growth potential for the Company going forward. Recommendation: BUY.