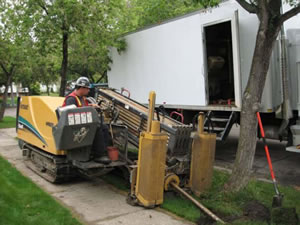 The directional drilling activities from T.C. Backhoe will soon be expanded with an accretive acquisition.

Until the deal is closed, the name of the private company won’t be disclosed, but Enterprise did mention that it’s profitable and complimentary with its T.C. Backhoe & Directional Drilling subsidiary.

We believe that both companies could be a very good match as T.C. Backhoe provides directional drilling and installation of new underground power, telecommunications and natural gas lines, while the Edmonton company specializes in maintenance, servicing and integrity testing of existing utilities.

Moreover, the private company, which has been in business for almost 15 years, brings a new set of customers to the table including Canada’s largest providers of electricity, infrastructure owned by all levels of government and property management firms. It’s obvious these customers may also become T.C. Backhoe customers down the road when new infrastructure has to be added.

Enterprise Group will pay a certain amount of cash, of which $250,000 will be paid by the issuance of 1,000,000 common shares – so each share is valued at $0.25, which is a 38% premium compared with today’s stock price – and the assumption of some equipment financing.

The transaction is expected to close on or before August 31, 2012 after Enterprise has conducted the necessary due diligence.

A large portion of the existing underground utility infrastructure in the Province of Alberta is rapidly aging. In fact, in some areas the infrastructure is beginning to fail as it’s beyond its intended useful life. So it’s a smart move by Enterprise’s management to seek an acquisition in this sector.

In addition to the repair and maintenance programs, the continuing development of new industrial, commercial and residential properties in the province requires the installation of new infrastructure, such as full underground services. Enterprise’s largest customers in this industry are forecasting significant growth over the next couple of years.

Recognizing the opportunity at hand, the Company is increasing this division’s production capacity by adding key personnel and equipment, and by this take-over.

In order to handle the Company’s expected growth, it recently added two experienced directors to its board. First, Mr. John Pinsent joined the Company. He’s a Chartered Accountant and founding partner of St. Arnaud Pinsent Steman, Chartered Accountants, a firm that he founded in 2004 following a distinguished ten-year career with Ernst & Young LLP as an Assurance Senior Manager and Director of Technology, Communication and Entertainment assurance services for Northern Alberta.

Furthermore, Mr. Keir B. Reynolds, who is the founder of Mammoth Market Advisory Corp., a firm that he founded in 2011 to assist high-growth companies with their capital markets strategies, was appointed as new director. Mr. Reynolds has assisted in all aspects of a company’s growth profile from seed capital through to M&A transactions including comprehensive investor relation (IR) services. Mr. Reynolds’ expertise and extensive experience will assist Enterprise in developing a highly effective IR campaign to illustrate the company’s current trajectory of growth, profitability and diversification.

Enterprise’s management has an eye for acquiring relatively small ma and pa operations, where, once acquired, it’s able to inject capital to expand both manpower and equipment to grow the business.

The Company has already proven it has the ability to successfully implement this when it bought A.G. Grant in 2005. Enterprise immediately hired more men and bought more equipment to expand the business. With success. At the time of the acquisition A.G. Grant had revenues of $7 million. The first year after the take-over it ended up doing $22 million in revenues, while making a $6 million profit.

In 2007, the Company repeated this feat after it bought T.C. Backhoe & Directional Drilling Inc.

The new acquisition will have a positive effect on Enterprise’s sales and earnings, in part thanks to the synergies created with T.C. Backhoe. Furthermore, the addition of two experienced directors has positioned the Company for exceptional growth in the quarters to come.