Record Sales and Earnings for Acme United in Second Quarter 2012 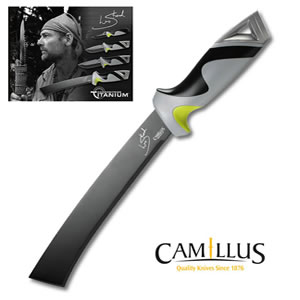 Les Stroud, a.k.a. Survivorman, combines the essence of survival and innovative thinking with the best material and craftsmanship of Camillus knives. The result is the Les Stroud Signature Survival Knives.

These are the highest quarterly sales and earnings numbers Acme United ever achieved.

Top Performance by all Brands

Acme’s five brands Westcott, Clauss, Camillus, Physicians Care and Pac-Kit all contributed to the Company’s success as each one had record quarterly sales.

Westcott, the school and office products brand of the Company, outperformed thanks to excellent iPoint pencil sharpener and Trim Air paper trimmer sales. Scissors continue to do well and also newer items like the Scissor Mouse contribute nicely to sales.

Clauss, which primarily manufactures cutting instruments for professionals in the hardware & industrial, lawn & garden, food processing, sewing and housewares markets, had strong results from heavy duty shears being sold at Home Depot and other cutting tools.

Camillus is one of the best known brands in the hunting, fishing, sporting and tactical knives industries. Although Camillus contributed about $1.5 million in sales in Q2, the second half of the year is expected to be even much better thanks to the Les Stroud product family, which is now shipping to several mass market retailers like WalMart and many major sporting goods chains like Cabellas, Academy Sports, Bass Pro, etc.

The fact that all brands are doing well, is very good news as it spreads the risk for the Company and for investors. If one brand, for example, performs a little weaker than expected the other ones are still there to make up for it.

During the conference call yesterday, Acme’s Chairman and CEO, Mr. Walter Johnsen gave some more financial details about C-Thru Ruler, which was acquired a few weeks ago. C-Thru’s sales last year were about $2.5 million while generating gross margins of approximately 40%. Because most of C-Thru’s business was absorbed by Acme’s existing operations, only one person had to be added in customer service.

Moreover, thanks to Acme’s existing customer base, C-Thru’s products will be placed in many more stores. There are obvious synergies with the Westcott brand for the crafts and school markets and gross margins may even be increased thanks to the combined purchasing power.

It’s clear C-Thru will have a very positive impact on Acme United’s bottom line in the quarters to come.

The one imperfection in Acme United’s second quarter was the decrease in net sales in Europe by 21% compared with the second quarter of last year, due to the bankruptcy of Schlecker, one the Company’s largest customers in Europe. The impact for the next six months is limited to about $200,000 in lost gross margins.

On the other hand, the loss of Schlecker as a customer, opens up new possibilities in Europe for Acme United as it can now offer the products it sold to Schlecker to other mass market retailers like Aldi, Lidl and Norma, with which it already has good relationships.

Also interesting to note was Mr. Johnsen’s comment on margins in China, where almost all of Acme’s products are manufactured. He said that because Chinese factories are less busy than they used to be, turnaround times on orders have decreased substantially from about 120 days in the past to around 80 days today.

Additionally, raw material costs have somewhat stabilized in China and the Chinese RMB has weakened compared with the US dollar. These are all positive facts from China. Nevertheless, the Company will continue to seek margin improvements in its factories.

Noteworthy in Acme’s balance sheet is the increase in bank debt of close to $4.5 million. This is attributable to the rise in inventory of about $3 million and the cost for the C-Thru acquisition of approximately $1.5 million.

In April Acme entered into a new five-year loan agreement with HSBC Bank for borrowings of up to $30 million at an interest rate of LIBOR plus 1.75%. At today’s interest rates that means the Company pays approximately 2 percent interest on it borrowings.

Also important is the increase in cash of close to $3 million on June 30, 2012 compared with a year ago, generated from the Company’s profits.

Acme United’s performance is really good. With a relatively small team of only 180 employees, the Company is able to produce attractive products that sell. Innovative products are constantly released and distribution keeps expanding.

The outlook for the coming quarters is bright.

We will start work on a new Company Report shortly. Based on the numbers for the first six months of 2012 and the positive outlook for the remainder of the year, it’s already clear though we’ll increase our current revenue guidance of $82.5 million and our earnings guidance of $1.02 per share.

Even when you already own shares of Acme United, this is a good time to add to your position.