The evolution of the Surimeau project into a high profile discovery prospect continues to gain traction as Renforth Resources Inc. (CA:RFR – $0.10 & US:RFHRF – $0.08 & GER:9RR – €0.05) steadily advances exploration work. The initial drilling effort, launched late last year, provided a tantalizing glimpse of the potential for a significant base metals system to be defined within the property boundary.

Based on interpretation of geophysical survey results, plus a review of historical exploration work, Renforth identified extensive structural corridors that were of interest as potential mineralized systems. Subsequent fieldwork, including sampling of surface showings, generated positive results. Sulphide minerals were confirmed within outcrops enriched with nickel, copper and zinc. 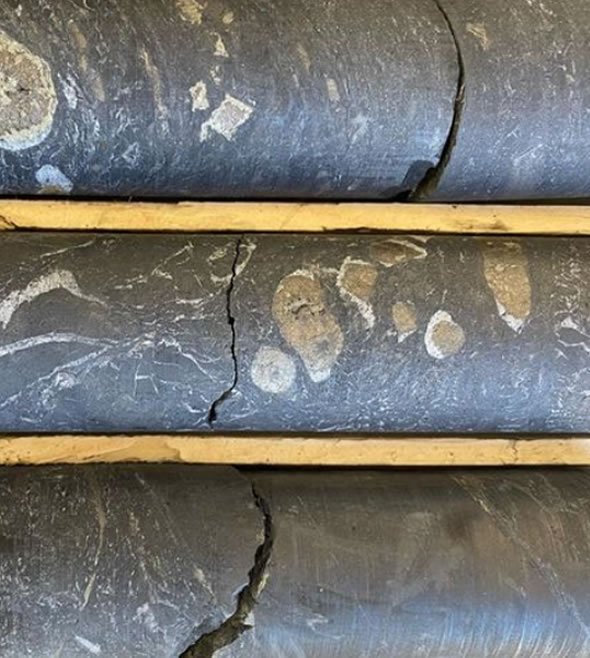 Core from the last drill hole at Surimeau

A significant drilling program was finished yesterday at Surimeau to follow up on the initial discovery success. The 3500m program was focused on roughly 2.2kms of the strike length for the Victoria West target.

The encouraging aspect to this update is that a mineralized zone up to 250m in width has been encountered along the structural zone. Significant content of sulphide minerals continues to be observed in every drill core. Beyond the drill program underway, a further 4km of strike length to the west remains to be tested in future exploration activity just within the Victoria West target area. To the east of the current drilling work, roughly 12km of strike remains almost unexplored, terminating at the Colonie target. We already know there is mineralization at Colonie based on historical exploration data. A very large system appears to be in play.

The flagship Parbec property also remains in the news for Renforth. This week another batch of assay results was reported for two more drill holes, plus partial results for a third hole. Once again the Company presented a highlight interval of significant length and gold grade. A section of 10.75m of drill core was mineralized with an average of 1.54 g/t gold in drill hole PAR20-121. There were higher grade intervals within this wide zone as well.

The drilling continues to generate appealing gold values. Renforth has been able to report gold intervals within every hole of the drill program. Several gold bearing zones were encountered within PAR20-114. A higher grade section of 2.64 g/t gold was reported over 1.15 of drill core, more than 400m down hole. Another higher grade section was reported in PAR20-118 of similar grade and width, along with several other gold zones encountered in closer to surface.

All of the data presented from the recent exploration work at Parbec so far has been positive. Wider intervals are being encountered regularly. These chunky gold-bearing zones contribute towards a greater tonnage of mineralization and build resource ounces for the overall deposit. Higher grade gold values continue to be reported in each batch of assay results. All of this contributes towards the outlook that a much larger pot of gold will be outlined at Parbec when the pending updated resource estimate is prepared.

The process to update the compliant resource estimate will commence once the final assay results for all of the previous drilling are in hand. There are still results pending for a total of 35 drill holes and a few more positive surprises ahead may create even higher expectations for the project.

Spanning 215 square kilometers, Surimeau is emerging as a potential game-changer for the Company. Located as it is in close proximity to numerous mines and abundant infrastructure, the successful definition of a large base metals deposit would become enormously attractive for development due to this favorable setting. To have achieved such a promising breakthrough from the very first drill hole is a validation of the discovery potential ahead.

The prospects to achieve a meaningful deposit are certainly improved based on the results so far. Just the near surface drilling work appears to have encountered a wide mineralized zone that already extends more than 2kms along strike. This zone remains open for expansion in all directions . There are several other targets that have been identified elsewhere on the large property area. Renforth could be busy with exploration at Surimeau for many years.

Meanwhile the progress to complete analysis of drill core samples from Parbec is also providing positive results. The amazing winning streak to encounter gold in every drill hole remains intact. Wide mineralized intervals and high grade gold values continue to be reported. The gold endowment at Parbec is becoming more attractive with every successful assay result.

Although Renforth’s stock price crossed 10 cents this week for the first time, its current market cap remains grossly undervalued given that it controls 100% of Surimeau and Parbec, along with other attractive properties in its portfolio. The upside potential remains exceptional. Smallcaps Recommendation: BUY.