The backlog of assay results from exploration work at the Parbec property has been a story for months. Renforth Resources Inc. (CA:RFR – $0.08 & US:RFHRF – $0.07 & GER:9RR – €0.04) continues to report updates as the data is received. In years past it was typical to await results from a lab facility for perhaps 4-6 weeks. In contrast, recently announced assay results are still coming in for drill holes completed late last year. The long delays have been frustrating but, more importantly, the news is very good.

This week Renforth reported assay data for core samples from five more drill holes. The highlight number from this batch is perhaps the best interval encountered so far, through the years of exploration work so far by the Company at Parbec. A continuous section of nearly 50m was mineralized with an average grade of 1.46g/t gold was presented from hole 20-116 (see red oval on below map). The wide interval is located within the conceptual open pit shell for the Parbec deposit.

Drill hole 20-116 was intended to step out from a gold zone originally encountered in 2018 by Renforth. However the drill orientation had shifted due to a slight incline of the drill pad. The actual path of the drill hole actually undercut the target zone. This fortunate circumstance resulted in the exceptional gold interval being revealed.

Drilling extended perpendicular to the Cadillac Break structure. Therefore geologists are confident that the interval was not generated as a result of drilling down dip within a narrow gold zone. Instead, this section is interpreted as part of a separate lens of gold mineralization. Renforth may now review other sample sections in the older drill core near from this zone (see blue oval on above map), to see if additional gold sections may have been overlooked.

Another positive element to this news came from drill hole 20-106 which was oriented outside of the proposed open pit shell. Multiple sections of gold bearing alteration were encountered within drill core from this hole. Gold zones were intersected almost from surface and also near the bottom of the drill hole to a depth of more than 375m. The highest grade interval of 1.32g/t gold was sampled across 4.45m of core.

Previously unknown gold zones have been encountered within areas of the deposit beyond the main target area. It is even more significant that many of these intervals are above the overall average grade of the deposit. Meanwhile, some of the recent drilling work was aligned to confirm historic drill results. Successful confirmation of the historic gold zones will enable Renforth to include the assay data for 62 drill holes that were completed in 1989 and 1993 which were not previously accounted for in the calculation of the Parbec resource estimate. The 2020 resource estimate for Parbec is already considered to be out of date. A significant increase is likely when the work is updated.

Last week Renforth reported that the first four drill holes of the current Surimeau exploration program have now been completed. Inspection of the drill core revealed the presence of visible nickel, copper and zinc sulphide alteration. In addition, thick bands of ultramafic rock were observed, along with graphitic siltstones and quartzites. This mineralization is similar to core pulled in the previous drilling program, more than a kilometer further along strike. There are also similarities observed with the mineralization of the LaLonde target, located approximately three kilometers to the north. 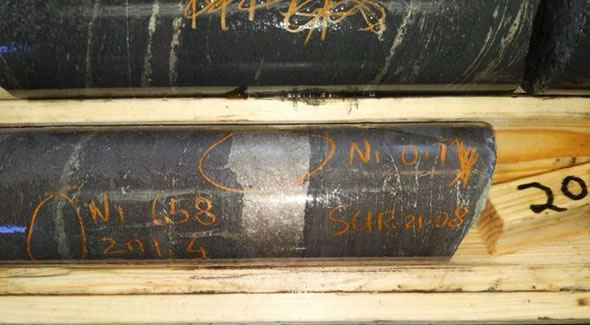 This core is from drill hole SUR-21-08 at Surimeau, with visible nickel sulphides

Minerals observed within the core sections included pentlandite (nickel), chalcopyrite (copper) and sphalerite (zinc). These minerals were located within or adjacent to pyrrhotite, a sulphide mineral commonly encountered within layered intrusions and associated with volcanogenic sulphide deposits. This alteration zone is estimated at roughly 200 meters in thickness, bordered by sediment rock units to the north and to the south.

Of note, the Victoria West target was defined in part through the interpretation of a high resolution MAG survey prepared by the Quebec government. The magnetic properties of pyrrhotite may have generated the anomaly outlined in the MAG survey. The promising start to the drilling work serves to validate the geophysical signatures. Several untested nearby MAG highs may also bear similar mineralization.

The confirmation of promising suites of alteration observed within the first few drill cores is certainly encouraging at this early stage. A total of 16 drill holes are scheduled in this program. Renforth plans to test about 3km of the strike length during this current drilling program. The Victoria West area is just one of several very large potential targets that have been defined on this enormous and underexplored property.

The promising results from the Parbec drilling work are shaping up to add a very significant component to the overall gold deposit when the pending resource estimate is updated later this year. Higher gold grades and wider mineralized intervals contribute to more robust economic considerations for development.

Meanwhile the progress at Surimeau is also encouraging. The alteration highlighted last week builds greater confidence that significant base metals deposits may be outlined within volcanogenic massive sulphide alteration. Surimeau has emerged as an important discovery prospect with superb upside potential. The abundance of established targets and the extent of the strike length spanning many kilometers for some of these interpreted structural corridors, will keep Renforth busy for many years at this exceptional project.

But it is the Parbec project which remains the priority to build immediate shareholder value. With the most ambitious exploration effort in the history of the Company now completed, a much more attractive deposit area has been outlined. There are still assay results pending for another 37 drill holes. All of the additional data will be incorporated into an update that is expected to generate a material increase to the estimated gold resource for the project. The average grade is also expected to increase as new higher grade discovery zones are included.

With much of the resource zone situated near surface, and within a perspective grade to support positive economics for an open pit mine, the updated resource report may attract some serious interest from a potential partner to develop the project. The opportunity for another successful property transaction would likely provide even more project funding to continue work at the other properties in the portfolio. Renforth will be well positioned to carry on aggressive exploration and build shareholder value. Smallcaps Recommendation: BUY.